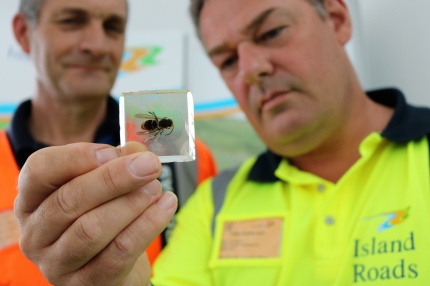 Island Roads has joined the front line in the battle against the Asian Hornet. In a new partnership with the Isle of Wight Bee Keeping Association, staff at Island Roads are being trained to identify the invasive creatures which pose a significant threat to our local bee population.

Asian Hornets, which are native to South East China, have been slowly travelling north through Europe, thought to have been introduced via timber freight and plant exports from China. In recent years the creatures have colonised Jersey and parts of Brittany in France, with fears the Isle of Wight could be next.

In conjunction with the Island’s Bee Keeping Association, Island Roads has produced a briefing note to distribute to scores of its staff who work year-round in all corners of the Island, making them ideally placed to spot the unwelcome creatures.

Asian Hornets have darker bodies than our native European Hornet and have distinctive yellow legs. They are also slightly smaller than our hornets, at around 3.5cm in length. They feed on bees, mayflies, moths and butterflies, all key pollinators and a crucial link in the food chain of our native wildlife.

Island Roads recently welcomed Liz Van Wyk from the IW Bee Keeping Association to talk to staff about the invasive insects and their threat to our delicate eco-system.

Island Roads service director Stephen Ashman said: “With our staff being out and about daily across the Island in all sorts of terrain, they will now have the knowledge to be able to identify an Asian Hornet from our native European Hornets and know what to do in order to try to prevent this non-native species from getting a foothold to the detriment of our indigenous bee populations.

“We take our responsibilities to the environment extremely seriously and in order to support the Island’s bee population have installed bee tubes in a number of our revamped bridges, parapets and retaining walls to provide habitat for solitary bees.

“Our work to raise awareness of the threat of Asian Hornets to our bees and wider eco-system will be shared with other companies within the wider Island Roads group, meaning there will be hundreds of additional eyes and ears looking out for the Asian Hornets throughout the south coast and other parts of the UK.”

Liz Van Wyk from the IW Bee Keeping Association said: “It is important that as many people as possible are aware of the Asian Hornet as their vigilance will be key in preventing the creatures from settling here, which would have devastating consequences for our eco-system.

“We would like to thank Island Roads for taking such an interest in the matter and for helping us in our work. We are always pleased to talk to similar companies should they feel their workforce could play a role in identifying the Asian Hornets while carrying out their work on the Island to help protect local wildlife.”

Anyone who thinks they have seen an Asian Hornet should report it, with photo, to alertnonnative@ceh.ac.uk

Alternatively, you can report it via an app ‘Asian Hornet Watch’ which is available for download on iPhone and Android.

The Isle of Wight Bee Keeping Association has also set up a Facebook group called ‘Isle of Wight Asian Hornet Watch’ where information about the creature can be found and shared.