Access works to begin on site at the Undercliff 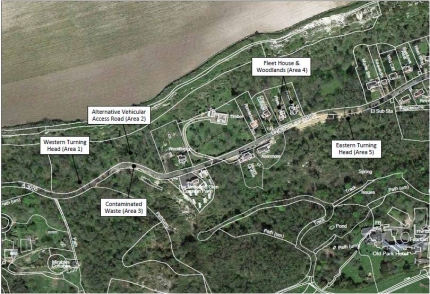 Works to restore access to properties at the Undercliff are to begin on site shortly following work by the Isle of Wight Council and Island Roads to tackle a number of issues which had threatened to halt the progress of the planned scheme.

The initial focus will be on the creation of a turning head for vehicles at the western (Niton) end, which will begin with preparatory works to clear old tree stumps and undergrowth, followed by construction work for a three-week period commencing on 22 February.

In the area of the Undercliff, where the new access road is due to be constructed, there is also good news after concerns that rare bats may be present in the woodland.  Following a tree climbing survey by bat experts, of the 18 trees identified for removal as part of the scheme, there was no evidence of bat habitation within 17 of the trees, with just one deemed as having ‘potential’ for bat habitation. As a safeguard, a bat expert will therefore need to be present on site throughout the process of the works.  This process has resulted from discussions between Island Roads and Natural England.

The works at this location, however, also require assent from Natural England for the removal of trees and while this has been granted it is subject to confirmation of the land owner.  The council is currently in negotiations with the land owner – the Wildlife Trust – to acquire the land and the Trust’s agreement will also be needed before works can progress.

The persistent rain that the Island has experienced over the winter period is presenting a further challenge though for other parts of the scheme.  Ground water level monitoring indicates that water levels have increased in the area where the access road is due to be constructed and in the area from the east between Fleet House and Woodlands where a pedestrian access route is due to be created.  Weekly monitoring data also shows an increase in the ground movement rate during the period December 2015 to January 2016. As a consequence of the prevailing conditions, it would be inappropriate to begin any works in this area (where the major slippage occurred) in the current circumstances. Island Roads will, however, monitor conditions with a view to starting the work as soon as the relevant permissions are in place, water levels recede and ground movements stabilise to the point where it is appropriate to progress works.

In the meantime, Island Roads has also registered with the Environment Agency to enable specialists to be commissioned to remove the contaminated materials present in the area when it is appropriate to do so, but for the time being the materials continue to pose no direct risk to residents. The Environment Agency has agreed to the material being left on site during the winter.

At the eastern (Ventnor) end of the scheme the creation of a turning head will also impact on a small number of trees.  This turning head is not within a site of special scientific interest and does not require permission from Natural England to remove trees. As in other locations, a bat expert will be present on site during any tree felling activity. The site for these works, however, is also sensitive to the water table and ground movements and therefore Island Roads is unable to progress the works at this location until the prevailing conditions stabilise. The area will be subject to an ongoing monitoring regime which will determine when it is suitable for these works to proceed.

Councillor Phil Jordan, Isle of Wight Council Executive member for the PFI, said: “We appreciate that this has been a lengthy process to get to this point and we sympathise greatly with those residents affected and appreciate their ongoing patience. This has, however, not been a straightforward situation when multiple land ownership, contaminated materials, protected wildlife habitation, adverse weather and ongoing geological movement have all contributed to a lengthy but necessary process for scheduling works on site. However, we are pleased that Island Roads can now make a start on the scheme to help restore access for Undercliff residents.”

Island Roads will also shortly be replacing the vandalised hoardings at both the eastern and western ends of the Undercliff to maintain the security and safety of the area. The site remains a construction area and as such we would remind residents not to enter the area within the hoardings as the area is still deemed unsafe for public access at this time