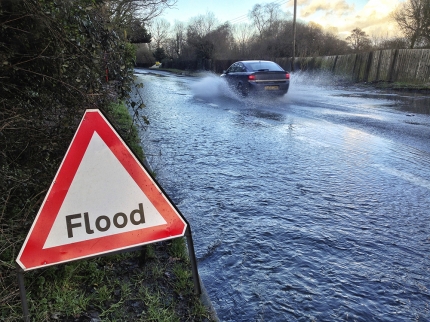 Landowners are again being advised of steps they should take to help reduce the risk of highway flooding this year.

The Isle of Wight Council, Island Roads and the Environment Agency are once more promoting the ‘Ditch It’ campaign that reminds land and property owners what they need to do to prevent localised flooding.

Under the Highways Act, homeowners and landowners have a legal duty to ensure adequate land and property drainage systems are in place and to stop water, vegetation and other debris from straying onto the highway. They must also ensure drainage ditches on their land are well maintained and clear of obstruction.

Anyone who has land adjacent to a watercourse (eg river or stream) has responsibilities in respect of flooding such as maintaining the bed and banks of the watercourse, clearing obstructions and maintaining flood defences.

The duties of landowners are explained in an information leaflet which Island Roads is working with its partner organisations to promote.

Phil Jordan, Isle of Wight Council’s Executive Member for highways and infrastructure said: “Extreme weather and tidal conditions can sometimes mean that flooding is inevitable but there is still much that land and property owners can do to help reduce the risk or mitigate the effects of flooding when it does occur.

“Flood water on our roads and pavements is not just at best a nuisance and at worst a danger for everyone, it can also leave lasting damage to the network. Though organisations such as Island Roads, The IW Council and the Environment Agency have their own statutory duties aimed at preventing flooding, there are also many land and property owners who might be are unaware of the role they must play in tackling flooding. This campaign is about helping those understand their responsibilities.”

Steve Ashman, Island Roads service director, said: “We have a rolling programme of work to ensure the highway drainage network is prepared to take away rainwater and we have also undertaken scores of local drainage improvement schemes under the highways PFI.

“As we have seen in recent storms, our staff are also out whenever and wherever they are required to keep the network as safe as possible. But all this can be helped by simple steps that landowners can take reduce flooding and the disruption and damage it brings. Rural roads in particular rely to a great extent on ditches to remove water and landowners need to keep them clear to ensure they are effective.

“We have worked really well with our partners in the past and are delighted to team up once again to spread the Ditch It message.”

Wesley Jones, the Environment Agency’s Flood and Coastal Erosion Risk Management team leader for East Hampshire and the Isle of Wight, said: “The Environment Agency are pleased to join together with Island Roads and the IW Council, seeing the Ditch It campaign as an important initiative. The proactive maintenance programme, being under taken by Island Roads, is integral to managing surface water flooding, which has the potential to affect us all at some time.

“We would also like to take this opportunity to remind those members of the public whose properties adjoin a river, of the important role they can play in reducing flood risk to themselves and others, by keeping the banks of the river clear of anything that has the potential to cause an obstruction if it is washed away.”