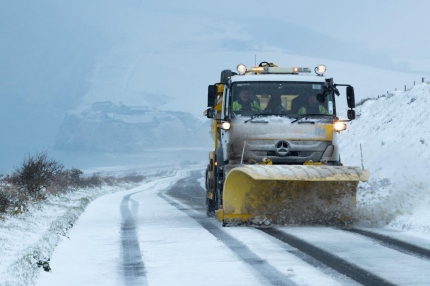 A snow plough in action along the military Road yesterday

Around 200 tonnes of salt have been used by Island Roads as part of their efforts to keep Island’s strategic road network open during the weekend’s snow.

Gritting took place continuously from 5pm on Saturday to 12.15pm on Sunday and then from 7.45 on Sunday evening. Runs are continuing as snow showers remain possible according to the weather forecast.

Island Roads’ six gritters were joined by three additional gritting lorries and all were fitted with ploughs to help clear snow drifts.

These drifts rendered Leeson Road at Ventnor impassable for a time on Sunday evening while the Downs Road was also closed for a while on Monday morning due to a combination of snow drifts and abandoned vehicles.

Dave Wallis, Island Roads operations and maintenance manager, said: “Once again the conditions have been testing and our staff worked hard in some pretty severe weather to keep the network open.”