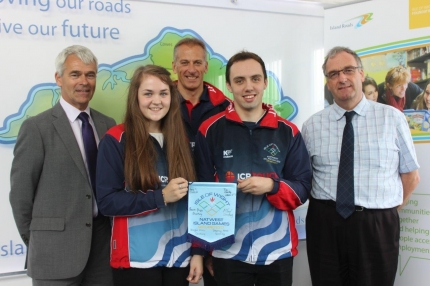 Two Island athletes have given a personal thankyou to the charitable foundation that helped fund their trip to the recent 2017 Island Games in Gotland.

Two Island athletes have given a personal thankyou to the charitable foundation that helped fund their trip to the recent 2017 Island Games in Gotland.

Wallis and Alex were some of the athletes whose trip to Gotland was supported with a £10,000 grant from the IW Foundation – the trust jointly funded by Ringway Island Roads, Meridiam, VINCI Concessions and Island Roads Services who together make up the partnership behind Island Roads.

Each year the Foundation donates grants of up to £16,000 to local good causes who work to tackle social inclusion.

Mark said: “I followed the success of the Island team from afar but it was great to hear first-hand from the athletes about their experiences. I am pleased the assistance of the Foundation helped enable them to compete and enjoy what was clearly a great experience for them.”

Team manager Martin Goodall said: “Taking an athletics team to an Island off the coast of Sweden for an international sporting event is an expensive undertaking and I believe that the opportunity to compete should be based solely upon ability – not whether athletes can afford it.

“The support of sponsors such as the IW Foundation meant we were able to field a very talented team of athletes who I hope repaid the faith shown in them with what was an excellent team performance.”

Stephen Child of Island Roads Services said: “The Foundation thought it important that Island athletes were able to pursue their sporting dreams and we are delighted to have played a part in assisting such a talented group of people.”