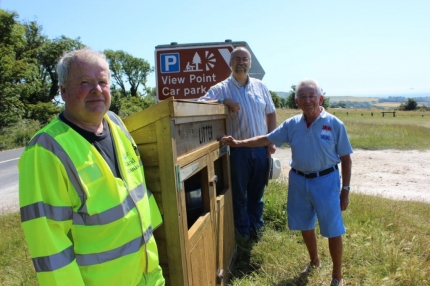 From left to right, Nick Rayner, Matthew Chatfield and Peter Ratcliffe (deputy major of Brading) with one of the new Brading Viewpoint bins

The wooden bins were handmade by Island Roads furniture operative Nick Rayner to complement the surroundings at Brading Viewpoint car park – an Area of Outstanding Natural Beauty. They are similar to the litter bin already in use at Bouldnor Veiwpoint, the design of which has already been praised by the Gift To Nature organisation which owns and manages countryside, green space and nature reserves across the Island.

Gift to Nature Manager, Matthew Chatfield, said: “We know that local people are really fond of our beautiful nature reserve at Brading Down, and as a viewpoint, the way it looks is really important.

“When we spoke to Brading Town Council, they asked us if we could do anything about the plastic litter bins on the Down that were spoiling the view, but to replace them with wooden bins was far too expensive for us. So we asked Island Roads if they could help. I was delighted when IR Operations manager Dave Wallis offered to build brand new wooden bins, and take away the redundant old ones.

“The new bins look great and will last for many years. Thanks Island Roads!”

Brading mayor Deborah Gardiner said: “As a town council we were keen that the new bins that were required were in harmony with the surroundings of the Viewpoint. We were very pleased that Island Roads has the skills and the willing to create bespoke ones that really complement the area.”

Dave Wallis said the new bins, while sympathetic to their surroundings were hard-wearing and easy to maintain. The difficulty was finding ones that met the PFI contract requirements to replace like for like the previous wooden bins when those designs were no longer available.

“We were just pleased that we have the expertise in house to be able to supply bespoke furniture such as this in these most environmentally sensitive areas,” he said.