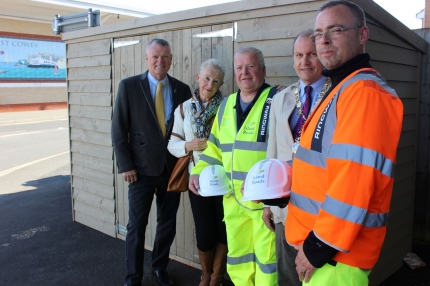 The store at Well Road has been created from re-used wood and will provide a permanent location from which sandbags can be collected when there is a flooding risk.

Along with St Mary’s car park in Cowes and Simeon Recreation Ground in Ryde, Well Road is one of three locations at which Island Roads is contracted to leave sandbags during weather warnings.

Previously sandbags have been left on a pallet for collection by residents but East Cowes Town Council and local IW Council member councillor Karl Love asked Island Roads if a store that was in keeping with the local surroundings could be provided.

Island Roads agreed and asked storeman Nick Raynor, who has already created bespoke litter bins at sensitive locations around the Island, to turn his hand to making a sandbag store.

“It has been created using left over wood from other projects and stained to ensure it is keeping with the surroundings,” said Dave Wallis, Island Roads’ operations and maintenance manager.

“Once again Nick has done a fantastic job and we are sure East Cowes residents will be pleased.”

Cllr Love said: “I’m delighted with the new sandbag store which presents a more pleasing environment for town resident and tourists arriving from the mainland.  I hope we can now make further environmental improvements to this area and our historic town.”

Island Roads will ensure the store will be stocked and unlocked whenever there is a relevant weather or flood warning.