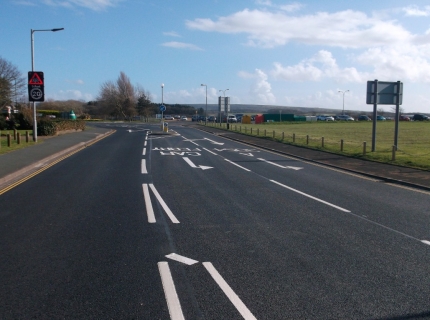 The work, which has been undertaken day and night by Island Roads staff and contractors over a seven-day period each week, has involved the installation of 750 piles to strengthen the historically unstable highway.

Cracks had been appearing and widening in the road for some time and the embankment could have collapsed over time threatening to destroy one of the major routes serving the West of the Island. With the work largely completed, despite the weather challenges faced by Island Roads during the project, the road has now been underpinned and fully upgraded to ensure its stability for years to come.

The road improvements are also a good example of a fence-to-fence project where all aspects of the highway have been reviewed and upgraded, from footways to lighting, surfacing to drainage. The scheme was also coordinated with improvements required by the utility companies to help to ensure that the newly surfaced road could remain intact for many years.

The scheme was also extended so that surfacing work could be undertaken along a mile long stretch from the start of the works through to the roundabout in front of the ferry terminal.

During the scheme the area of the green was also re-profiled to make it easier to maintain and barriers were repainted and repaired.

Further work has been undertaken to reinstate the Viewpoint car park, which has been used as a site compound during the works and some additional works will also be completed on the revetment for the benefit of local residents as well as some additional finishing work along the scheme.

David Gibby the director responsible at Island Roads for the Bouldnor scheme said, “I’d like to thank residents and businesses for their patience whilst the road closure has been in place so that we could complete this important but complex work.

“I am certain that the improvements to this road will have a lasting benefit for those living on and visiting the Island.  We will remain in the area for a further period to put the finishing touches to our works and complete the installation of the pedestrian crossing but we are delighted to be able to re-open the road for residents and visitors to use.”