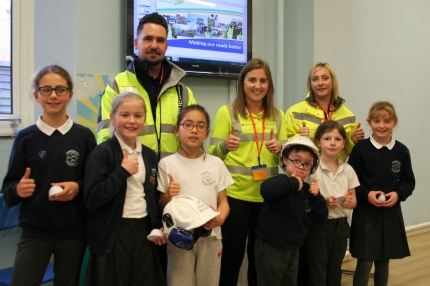 As part of Road Safety Week, Island Roads staff visited Brighstone Primary School to talk to pupils about the importance of staying safe near roadworks.

Structures project manager Jo Saunders and senior district steward Matt Shaw spoke to children from years 4, 5 and 6 about the wide range of work carried out by Island Roads with an emphasis on safety issues.

Island Roads staff have been a regular sight in and around Brighstone recently, with highways improvement works taking place in roads at the front and rear of the school, as well as along the Military Road nearby.

During the talk, children took part in a short quiz and were shown safety clothing worn by Island Roads staff. They also received a demonstration of some of the safety equipment used by Island Roads and why it is needed.

Pupils also participated in a safety clothing challenge which involved dressing one of the teachers in high-viz protective workwear, much to the amusement of the children.

Teresa Fox, headteacher at Brighstone Primary School, said: “We were delighted to welcome Island Roads to talk to pupils about their work. Along with reinforcing key safety messages, it really helped the children to understand that there is so much more to their role other than roadworks. The presentation was fun, engaging and interactive, I would definitely recommend that other schools take up the opportunity.”

Jo Saunders said: “We had great fun speaking to pupils at Brighstone School, they were very interested in our work and enjoyed taking part in the activities we arranged for them. As well as spreading important safety messages and explaining more about what we do at Island Roads, I hope we inspired some of the children to consider a future career in engineering or construction.”

Island Roads is keen to spread safety messages around their work sites and also in general and is planning more talks to schools in the future.

Cllr Paul Brading, IW Council cabinet member for Children’s Services, Education and Skills: Councillor Paul Brading. “Safety is one of life’s most important lessons and we are really impressed that Island Roads is working with our school children to get across this message.

“Hopefully these talks will not only lead to a safer Island but also inspire the next generation of highway workers and engineers.”