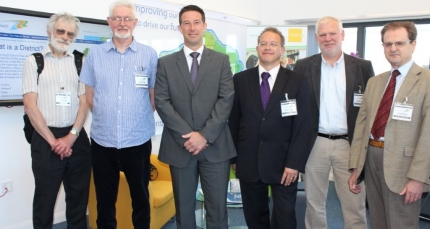 Island businesses have been given the opportunity to hear more about the Highways PFI and what it means for the local economy at two briefing sessions held by Island Roads.

Members of the IW Federation of Small Businesses and the IW Chamber of Commerce were invited to the two sessions at Island Roads’ Newport HQ.

Around 30 people attended the presentations which included inputs from Island Roads’ management team and also a question and answer session.

“I think members found the session extremely informative. There is much written and said about the Highways PFI so it was nice to receive a presentation from those at the heart of the project while our members were also able to discuss issues that affect them,” said Norman Arnold, vice chairman of the 900-member IW Federation of Small Businesses branch.

“I think it is clear is that the project has the potential to bring huge benefits not only to the Island’s historically poor roads network but also to the local economy. We were also pleased to hear of – and impressed by – Island Roads’ commitment to working with local businesses both in terms of informing them of forthcoming works and in terms of providing commercial opportunities to local companies,” Mr Arnold said.

Paul Herbert, Island Roads service director, said: “As an Island company that employs 200 Island people we are extremely keen to work closely with the local business community. This is particularly so as we continue a very intense programme of activity to improve the network including significant stretches of some of our busiest roads.

“The sessions were very useful both in terms of explaining more to local businesses about the project and how it is delivered but also in hearing feedback from those business people present. We would like to thank the Federation and the Chamber for their interest and we will continue to develop a positive working relationship between Island Roads and the local business community.”