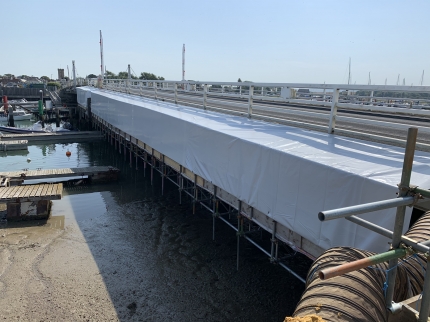 Island Roads is continuing a busy programme of work to upgrade and improve the structures that support the Island’s road, cycleway and footway network.

A number of schemes will begin in the coming weeks as part of a rolling programme to improve bridges, culverts and retaining walls Island-wide.

Ian Hodson, Island Roads structures manager, said: “There are scores of these structures that, while often not seen by road users, nevertheless play a crucial role in supporting the Island’s road network.

“Island Roads has a duty to ensure these structures are upgraded and maintained to a high standard and to do this we need an intense programme of work. This often means replacing all or part of these structures. This is major work that can mean that there is some disruption to those who drive, walk, cycle or ride over them.

“Naturally we take what steps we reasonably can to minimise disruption but work of this nature often does require a part or full closure for safety reasons. We would like to thank all users of the network for their ongoing co-operation and understanding.”

Fatting Park Bridge, on the Wootton to Whippingham cycle route, will be strengthened in a four-week project after the school holidays. Island Roads will be looking to keep to a minimum any closures of the path during the work

Haseley and Blackrock Bridges will have deck replacement work in the coming months. Divers will be used to undertake some of the initial work without the need for any closures or diversions. The main work at Haseley Bridge will begin in mid-September and last up to six weeks, during which a diversion will be in place.

The Blackrock Bridge deck replacement will begin in late October and last between four and six weeks, during which that section of the cycle path will be closed.

Park Road Bridge near Wootton will also be closed while works are carried out. The work will begin in early September and last up to eight weeks. Residents will be able to access their properties at all times and access to local businesses will be maintained via Lushington Hill.

The deck of Carpenters Road Bridge at St Helens will also be replaced in a four-week scheme beginning in September. The road will be closed at the bridge during this time but access to properties and businesses will be maintained.

Two-way lights will also be in operation while a section of the deck of Free Place Bridge on the main road through Wellow is also replaced in a scheme starting early in October and lasting up to six weeks.

Part of the bridge deck at Ladies Walk, Binstead, will also be replaced during up to six weeks of work beginning in September.

Meanwhile work to repaint Yarmouth Bridge is ongoing and Island Roads continues to talk to local businesses about the scheduling of the most difficult forthcoming phase – that to repaint the swing bridge section of the structure.