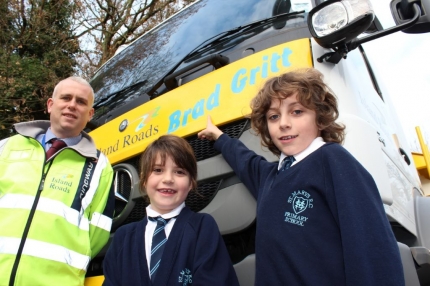 Island Roads kept a date with St Mary’s Catholic Primary School in Ryde by visiting with a gritting lorry that was named Brad Gritt by two pupils.

Brother and sister Jabel and Daisy Philpott chose the moniker in a competition among local schools last year to name six gritters in the Island Roads fleet. The vehicle had been due to visit the school at the end of last year but the date was cancelled as Brad Gritt was pressed into around the clock action during freezing weather.

With the current gritting season underway, Island roads staff went to the school to show Brad Gritt to Jabel, ten and Daisy, seven, and to explain to them and fellow pupils how the vehicle works and about the winter maintenance on the Island’s roads during freezing weather.

Jabel and Daisy also got the chance to take the wheel of the stationary vehicle.

Dave Wallis, Island Roads operations manager said: “I think of all the names chosen by pupils in the competition, it is Brad Gritt that is the one that gets most comment. It was good to take the vehicle out to St Mary’s to see Jabel and Daisy.

“They and their schoolmates seemed to enjoy getting to hear about the work of our gritters and of course getting up into the cockpit.”

The other gritters in the fleet were named Sally the Salt Spreader, Snowy, Frosty, George and Goliath.