Christmas comes early for 12 good causes thanks to IW Foundation 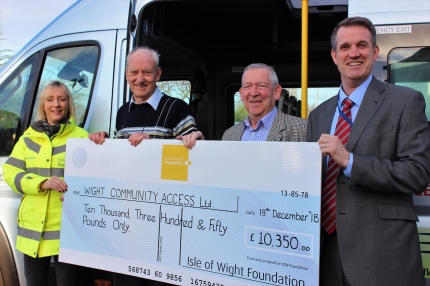 Local good causes are to receive a share of nearly £95,000 thanks to the Isle of Wight Foundation – the charitable trust set up by the organisations behind Island Roads.

Twelve deserving projects have been selected from dozens of applications for their focus on reducing social isolation on the Island and assisting people into education, training or employment.

“On behalf of Ringway Island Roads, Meridiam, VINCI Concessions and Island Roads Services  – the group of organisations behind Island Roads – I am hugely proud of the positive impact the Foundation’s support is having on the Island with hundreds of people benefiting through the projects we have supported. We have seen how communities have become better connected and individuals have gone on to enter employment and we are delighted to continue our work on the Island by supporting twelve more deserving projects in the coming year.

”I hope that the work of the foundation highlights the determination of everyone behind Island Roads not only to provide huge improvements to the road network but also to work closely with the Island community.”

Michael Craig, co-founder of Wight Community Access, said: “FYTbus is a charity providing community bus services to the people of West Wight.  Our passengers mostly have limited access to a car and need transport to get to local retail, health, social; and leisure amenities thereby improving their life quality and independence in later life. Some 70 volunteers drive our buses, assist passengers, help in our shop and run all the other functions necessary for us to provide these services to our communities – community spirit in action!

“In the coming months, we will be adding a new minibus to our fleet.  This most generous contribution from the Isle of Wight Foundation will allow us to continue with our present services and also to increase the help we can give to some more specific groups of vulnerable people such as those with Alzheimer’s and their carers.”

Details of the first six projects to be announced are outlined below – receiving a combined total of more than £51,000.

First Act 2011 – the theatre group for those with additional needs and disabilities will received £9,300 to enable the charity to run weekly activities, workshops, and rehearsals to build towards biannual performances at Shanklin Theatre.  The group builds confidence in its members by boosting communication skills, social integration and gives them a sense of commitment towards final productions.

Wight Community Access – the group will receive £10,350 towards purchasing a new FYT bus. The FYT bus provides community transport services to residents in the West Wight who are in need of such services because of age, sickness, disabilities, poverty of lack of safe and adequate public transport.

RAF 1024 Squadron Air Training Corps – A “Technology Lifeline” is being provided to the cadets thanks to a grant of £5,000. Computers, laptops, tablets and printers will be purchased to replace failing IT equipment to enable the cadets to undertake online training and qualifications which are not funded by the Ministry of Defence.

Brading Community Partnership – the foundation will donate £11,200 to enable to partnership to upgrade the windows at Brading Youth Club. The new double-glazed windows and doors will retain heat, help to reduce running costs and prevent condensation in the sports hall. The funding will also mean the new windows will be in character with the old building.

Care in the Garden – the project will receive £11,000 for a crew van to transport workers and equipment off site.  This means they can take on more off-site contract work and also enable them to offer more training opportunities for adults with learning disabilities.

The Phoenix Project – £4,400 to purchase “accessible” computers and laptops for people with learning difficulties who find it difficult to access modern technology to gain knowledge and experience with computers in the project’s dedicated computer suite.

The Isle of Wight Foundation is a registered charity and jointly funded by Ringway Island Roads, Meridiam, VINCI Concessions and Island Roads Services who together make up the partnership behind Island Roads.