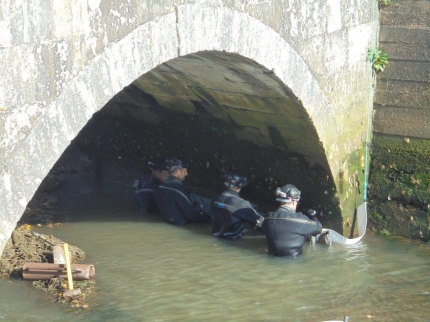 Island Roads found more than they had bargained for during repairs to Coppins Bridge.

While completing the work to strengthen the eastern abutment of the structure, workmen were amazed at the amount of debris uncovered.

“Among items we found in the watercourse during the work were an old shopping trolley, two rather large tree trunks, two car tyres and a computer,” said Island Roads structures engineer Lindsay Borthwick. All the items were removed and disposed of appropriately.

The remedial work was necessary because, over time, the tidal flows had eroded the riverbank beneath the bridge’s supporting structure – a process called scouring. Without the repair work, the structure could have ultimately failed.

The bridge was strengthened by installing a heavy duty fabric ‘groutbag’ into the void beneath the abutment.  This custom-made bag was then filled with cement grout – a substance similar to concrete but more fluid – that filled the bag which in turn filled the void and strengthened the bridge.

The project was completed on schedule without the need for any traffic restrictions.

Coppins Bridge is one of over 200 bridges across the Island for which Island Roads has responsibility under the Highways PFI contract. As such, the vital repair work was completed at the expense of Island Roads.