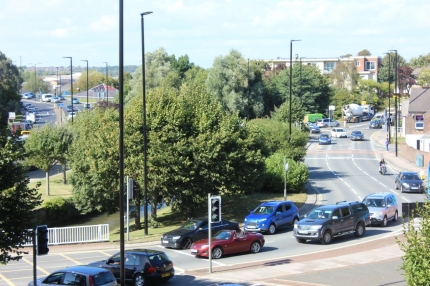 The resurfacing of Coppins Bridge, the Island’s busiest junction, is to begin next week.

Island Roads is undertaking the work overnight and at the later start time of 10.00pm in order to reduce inconvenience. The junction will be re-opened to traffic at 6am at the end of each work shift. However, it should be noted that Upper Coppins Bridge Car Park will be closed between 10pm and 6.00am while work is underway.

The resurfacing work will begin on September 14 and is expected to take nine weekday nights to complete. Outside of resurfacing work times, the junction will be open to traffic. The traffic signals will remain active and the lane lining repainted at the end of each shift.

Nevertheless, while re-open, there may be ramps and raised ironworks in place for the duration of the scheme. As a result it is possible the work may cause some inconvenience and it may be useful for road users to allow additional journey times or take alternative routes. Motorists should also drive through Coppins Bridge at a safe speed according to the temporary condition of the carriageway.

In advance of the work, Island Roads staff were at Upper Coppins Bridge Car Park and outside County Hall to explain more about the scheme. Nearby residents, businesses and elected members have also received letters explaining the details of the scheme.

“This is clearly a scheme that will impact a great many road users and we have taken care to inform the community about the work,” said Island Roads project manager Derek Benfield.

“Everyone is aware just how busy Coppins Bridge is and we hope that scheduling work outside of the main holiday season and by having the later start time of 10pm, we will keep disruption to a minimum. It is however impossible for a scheme of this nature not to have some impact on traffic and we apologise in advance for any inconvenience but do hope this will be offset by the improvements we will be making.”

Already under the Highway’s PFI, Coppins Bridge itself has also been strengthened to ensure this key route remains in operation for years to come.