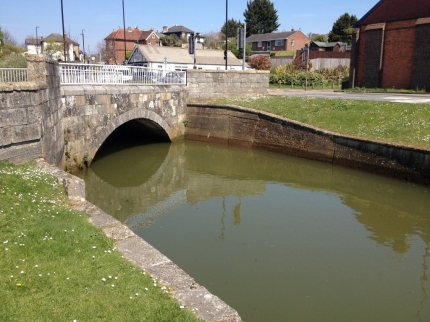 A major scheme to strengthen one of the Island’s most used pedestrian bridges is due to begin later this month.

Island Roads will be undertaking a week-long project to underpin the eastern section of Coppins Bridge in Newport where the foundations have been undermined by the action of the river flow, a process called scouring. This has meant material washed away over time has left a void underneath the bridge which, if left untreated, could cause the bridge to fail.

The scouring was discovered by Island Roads during its programme of inspections carried out on all the 211 bridges for which it is responsible.

The remedial work will involve a diving team from an Island based company installing a heavy duty fabric ‘groutbag’ into the void. This custom-made bag is then filled with cement grout – a substance similar to concrete but more fluid – which expands within the bag to fill the void. Further work will then be undertaken to make good the river bed.

Using the grout-bag prevents the grout leaking into the watercourse and also means it is not necessary to divert the water – itself a difficult task – to create the dry conditions which would otherwise be necessary for the work. Consent has been sought from the Environment Agency to undertake the scheme.

Work is scheduled to begin on October 19 and is expected to last a week. Pedestrian access will be retained throughout and the scheme will not involve the closure of Coppins Bridge Roundabout to vehicles.

Dave Wallis, Island Roads operations manager, said: “The project involves us undertaking crucial strengthening work without which the scour hole would continue to grow in size and further undermine the abutment foundations. This in turn could lead to the eastern abutment failing and ultimately the collapse of the bridge.

“Major work is clearly needed to prolong the life of Coppins Bridge and we have taken great care to ensure an effective design solution is not only environmentally sensitive but can also be achieved with the minimum possible disruption to residents and road users.”

The cost of the work will be met by Island Roads as under the highways PFI the responsibility for maintaining assets within the scope of the contract lies with the company rather than the Isle of Wight Council.