Cycle track to open during holidays despite power works 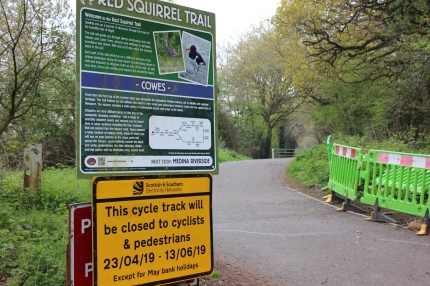 The Cowes to Newport cycle track

Island Roads has been working with Scottish and Southern Electricity (SSE) to minimise disruption during important work to renew high voltage cables beneath the Cowes to Newport cycle track.

The SSE work will see three cables laid a metre beneath the cycle track to improve supplies to the Cowes area which have been hit by recent outages due to the ageing infrastructure. The work will be done between April 23 and June 13 during which time it will be necessary to close the section of the track for periods between Arctic Road, Cowes and Medham.

Island Roads nor the IW Council is able to prevent a public utility company undertaking schemes of this nature but both seek to work with the company involved to reduce the impact of works on the travelling public.

As a result of such discussions with SSE in respect of the cycletrack, it has been agreed that work will not take place during the Bank Holidays (May 6 and 27) or school half term holiday (May 27 – 31).  Island Roads is directing work takes place over extended hours during the closure (at least 7am to 7pm) in order to reduce the overall duration of the work. If work is not taking place, and it is safe to do so, the cycle track will be open during weekends.

SSE work of this type is subject to delays during inclement weather so the company wants to undertake the project at a time when favourable weather can reasonably be expected. The planned schedule does however seek to avoid the main holiday season.

Iain Thornton, Island Roads streetworks manager, said: “This work is necessary to improve the powered infrastructure to Cowes but we have worked with SSE to reduce disruption and to ensure the cycle track is open as much as possible outside of SSE work times.

“By opening the route when possible at weekends and during the school May half-term holiday, as well as bank holidays we will at least ensure the cycle track will be open for leisure use as much as possible and, crucially, for events like the Randonee.”

Simon Biles of SSE said: “This is a project that we need to undertake as there is a real need to upgrade these cables to improve power supplies now and for the future.

“We have to do the work at a time of year when the weather should be fair but we have sought to avoid the busiest summer period and we hope that by not working during holiday periods and by opening up the track at weekends – if it is possible to do so – we will reduce inconvenience as much as we can.”