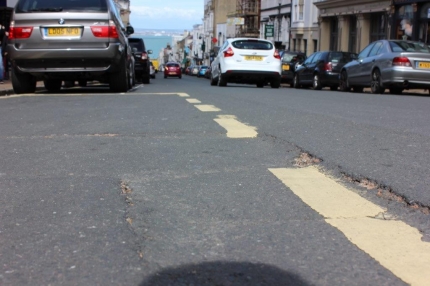 The final phase of planned work to ensure the streets of Ryde are able to host the Pearl Izumi Tour Series cycle race are to be undertaken early next week.

A schedule of road improvements had been identified during an inspection of the planned route by race organisers and Island Roads has been adjusting its PFI programme to carry out the necessary work ahead of this prestigious event.

Most of the route has already been completed with the most intensive work, rebuilding and resurfacing Cross Street, being finishing ahead of schedule earlier this week.

In the last phase of work, the surfaces of Union Street and the remaining section of Dover Street, both of which are largely concrete based, will both be subject to repair works on Monday and Tuesday (11th-12th May) next week to ensure the last section of the race circuit is in a suitable condition for the competitors.

While pedestrian access will be maintained at all times to local properties and businesses, diversionary routes will be in place for vehicles between the hours of 9am and 10pm to allow the work to be carried out as quickly and as safely as possible.  Parking in Union Street itself will also be suspended but car parks remain available in locations nearby.

Island Roads Service director Paul Herbert said: “While we apologise for any inconvenience caused during these works, we would stress they are necessary in order for the Pearl Izumi Tour Series event to be held in the town.  They will also leave the surface of Union Street in a better condition for the benefit of all road users until such time as we return to complete the upgrade works to this section of road under the PFI programme.”

Diversions are in place along West Street, Spencer Road and St Thomas Street for vehicular traffic and buses who wish to access the Esplanade and Pier.