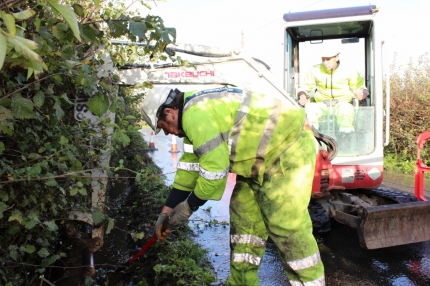 Island Roads is taking a number of steps to help reduce the risk of highway flooding this autumn and winter.

Extra gully cleansing has taken place at known-hotspots and additional visits will be made to these sites throughout the winter months.

This work comes after efforts over the last eighteen months, since Island Roads took responsibility for the PFI contract on the Island, to complete 3 major and 18 minor drainage schemes along with 10 additional schemes and jet cleansing of over 10,000 drainage lines around the Island.

In addition, a programme of work is underway to clear the 31km of ditches for which Island Roads is responsible. Blocked ditches can be a significant contributory factor towards highways flooding and this programme is being prioritised to tackle areas that have experienced on-going difficulties.

This increased activity comes on top of extra resources having been deployed in recent weeks to remove fallen leaves from the highway and drainage network.

Two additional 15-tonne mechanical road-sweepers have been drafted in to give us extra ability to clear the autumn leaf fall. These join our existing fleet of six road-sweeping vehicles plus nine 3.5 tonne trucks,” said Dave Wallis, Island Roads operations manager.

“Of course there are some circumstances when unusually heavy or prolonged rainfall inevitably leads to some flooding but precautionary steps can be – and have been- undertaken to help reduce the likelihood.”

Island Roads and the Isle of Wight Council are also reminding landowners of their responsibilities to clear and maintain their ditches and banks as this will also help to prevent flooding.

Further information on the rights and responsibilities of landowners living next to a stream, river or ditch is available here https://www.gov.uk/government/uploads/system/uploads/attachment_data/file/297423/LIT_7114_c70612.pdf