Four on the road to engineering career 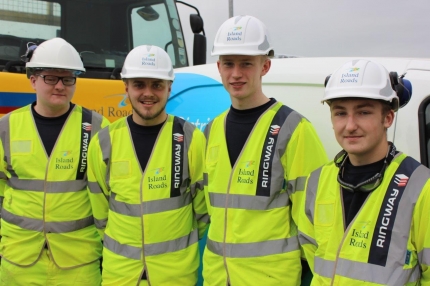 Four young Island men are on the path to a career in highway construction thanks to Island Roads.

The four have become the latest to be enrolled as Island Roads apprentices which means that over the next two years they will train towards a national qualification in highway construction and if successful be offered a full-time role with the Highways PFI contractor. Among skills they will learn during their apprenticeships are highway excavation and reinstatement, traffic management, utilities surveying and health and safety. The apprenticeship combines on-the-job training with college coursework.

Since 2013, 15 apprentices have been taken on by Island Roads’. All remain in employment in the engineering sector, 12 with Island Roads. Besides apprenticeships for highways operatives Island Roads also offers places within in administrative and managerial functions.

Sam said: “This is a really great opportunity for all of us and we are excited about developing our skills with such a good local company. Island Roads is part of a wider group so there are also big opportunities for career development on the mainland and abroad in the future.”

All four of the new apprentices attended Island high schools and then Isle of Wight College. Liam is following in the footsteps of his brother Todd who is also at Island Roads having graduated from the company’s apprenticeship programme.

Paul Herbert, Island Roads service director, said the company had been very impressed with the standard of applicants seeking to join this year’s intake of apprentices.

“We had initially looked to employ two apprentices but the calibre of these four applicants in particular was just so promising that we expanded this year’s apprenticeship programme to take them on. We are delighted to have them join our team and very pleased that Island Roads is once again able to offer career opportunities to young Islanders,” Paul said.

Island Roads currently employs around 280 Island people and so far has spent £48 million with around 150 local supply chain partners.