Gearing up for further major road improvements in 2017 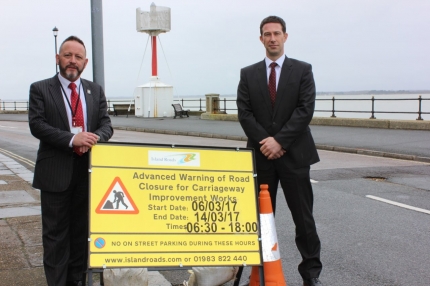 Island Roads has announced the first resurfacing schemes in what will be another intensive period of highway improvement work this year.

At the same time, Cllr Jon Gilbey, the Isle of Wight Council cabinet member responsible for the Highways PFI has confirmed that it is important to advise residents that the price to pay for such an extensive programme is that there will be some inevitable, localised, disruption.

Councillor Gilbey said: “Though both the council and Island Roads aim to schedule the work with the needs of all residents and road users in mind and while Island Roads has two crews working at night on the busiest routes to further minimise disruption, it is simply impossible to carry out this intensity of work without causing some inconvenience. We have the added difficulty of not being able to carry out some of the larger schemes during the summer months due to the huge impact it would have on our tourism and visitors.

“We have to remember that this level of improvement work is unprecedented on the Island and is essential if we are to continue the programme under which the condition of our roads is transformed from being among the worst in the country to being among the very best.

“Island Roads, myself and the IW Council understand that there will be times when road users and residents face disruption. Many people have already experienced this inconvenience during previous improvement work and we are really grateful for their understanding.

“Without a doubt elements of the programme do impact on people’s daily life, albeit hopefully for a short time, but I hope residents can recognise the long term gain of having a greatly improved road network. I will be working to ensure Island Roads and our contract management team work together in taking all reasonable steps to keep disruption to a minimum.”

The full resurfacing programme for 2017 has been submitted to the Isle of Wight Council. The Council studies the programme submitted each year by Island Roads to ensure, among other things, issues such as the contractual requirement to keep disruption to a minimum has been considered alongside the requirement to achieve the ambitious targets set in the contract. For example, the contract stipulates the times – day or night – work can take place on certain roads and also limits the timing and location of work so as not to affect the Island’s major tourism and visitor events.

Island Roads service director Paul Herbert said: “As an Island company we are very aware of the impact our work can have on residents. Island Roads employs around 200 Island residents so our staff are among those who are, on occasions, disrupted so we really do understand the frustrations.

“But road restrictions are necessary in order to ensure our work sites are as safe as they can be and that the work can be undertaken as swiftly as possible. As always, we will continue to give residents as much advanced information on each scheme, directly, through letter drops, scheme boards on site and through the media, as possible.”

To try to ensure the programme and individual schemes run on schedule Island Roads has this year employed two additional staff members to bolster its project management function.

The first four resurfacing projects of the 2017 programme begin on March 6 and are at Egypt Esplanade and Prince’s Esplanade at Cowes (which will mean the entire seafront stretch between Cowes and Gurnard will have been upgraded), Westhill Lane at Freshwater and Wilmingham Lane, Freshwater which will all be undertaken during the day and Chatfield Road at Niton will which will be undertaken at night time. Residents, in these roads as well as elected representatives and other interested parties have all been informed of the details of the schemes and how they will be affected during work periods.