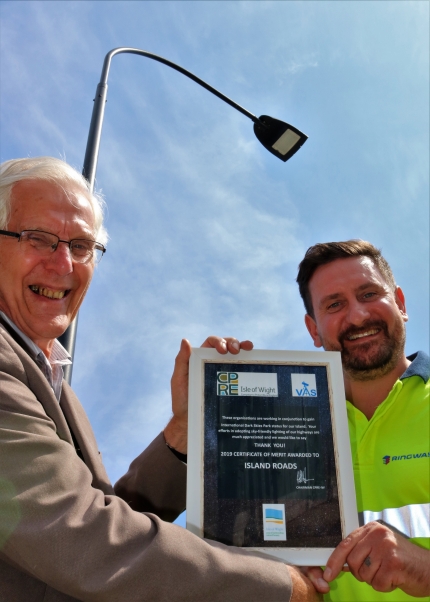 Island Roads has been presented with a Campaign to Protect Rural England Good Lighting Award for its work to upgrade the Island’s network of streetlights.

The award from the Island’s Campaign to Protect Rural England branch (CPRE-IW) recognises the contribution the installation of new LED lighting has made to reducing light pollution across the Island.

This is the third time Island Roads has received a CPRE-IW Good Lighting Award, having previously being recognised for the LED lighting of Mill Hill Road in Cowes and for the well-designed heritage lighting installed in the Island’s town centres.

John Langley, CPRE-IW Good Lighting Awards Coordinator, said: “Since Island Roads completed its highways illumination project, international light pollution monitoring satellites, together with Island-wide sky quality readings, show that our skies are now on a par with the best in the world and we believe that much of that is down to the good work carried out by Island Roads.

“Thanks to their work we are now in a position to make a bid to have the southern part of the Island designated as an International Dark Skies Park which involves submitting evidence to the International Dark-Skies Association in the USA for accreditation. We are hopeful our bid will be successful, putting the Isle of Wight well and truly on the map as a top destination for stargazing.”

The street lighting improvement programme involved enhancing or replacing 12,068 streetlights across the Isle of Wight. The new lighting uses less energy and requires less maintenance making it more cost effective and better for the environment than the previous lighting system. The old columns and lights were reused or recycled where possible, for example steel columns were recovered and recycled and concrete columns crushed and reused as sub-base for road construction projects.

Scott Burborough, Island Roads Powered Apparatus Manager, said: “The upgrade of the Island’s streetlamp network was a major project for Island Roads which has seen thousands of lamps upgraded with more energy efficient lighting. As well as being more reliable and cost effective, we are delighted that our work has been recognised for its contribution to reducing light pollution on the Island.”