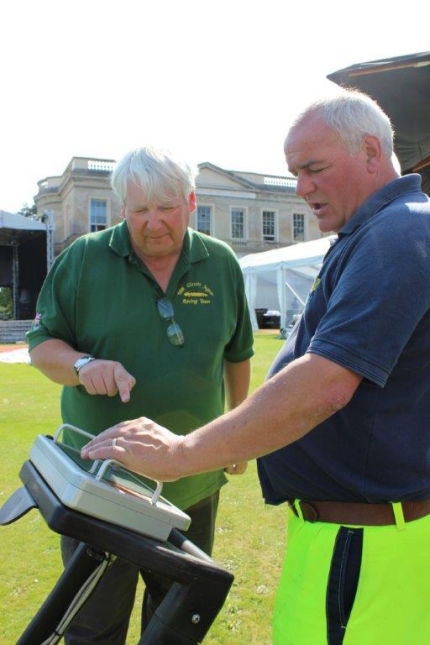 Island Roads has been using hi-tech surveying equipment to help unlock the secrets of Northwood House and Park – including looking for the rumoured hidden network of tunnels that may run beneath the Park.

The location, destination and purpose of tunnels that are thought to lead out from the historic building have long been the subject of conjecture and now Northwood House Charitable Trust Company Limited, who is responsible for Northwood House, is being helped by Island Roads to shed light on this suspected subterranean network.

Over the years it has been suggested the tunnels were used for anything from transporting contraband, escaping French invaders to perhaps even allowing high profile historic figures including royalty to secretly attend lavish parties at Northwood House. The Charity is hoping that the new investigation by Island Roads can help separate myth from reality.

As part of the work, Island Roads utility surveyor Andrew Tunnicliffe, undertook an initial reconnoitre of the house and grounds using ground-penetrating radar equipment traditionally used to locate underground services prior to highway improvement work. The survey was done under Island Roads’ volunteering programme in which staff are given two days paid leave annually in order to lend a helping hand to local good causes.

During the initial study this week, Andrew was able to definitively mark the route of the 200-metre tunnel that runs from the House to the Nunnery Steps Park entrance on Baring Road and also define the boundaries of a former Roman Catholic church built in the grounds in the early 1900s for a group of Benedictine Nuns after their exile from France during the time the House was used as a convent.

Island Roads offered to assist the Charity’s research after Andrew read about the building’s secret past in a new history of the building and Park by Tim Wander.

Tim is currently working with the Charity as the Building Project Manager overseeing the current phase of renovation works and working on future developments for the Grade II* Northwood House and Park. He has edited, written, compiled and designed this guidebook to support the House in his own time and all proceeds go toward the preservation and maintenance of the House.

Tim said he was delighted with the findings of the initial survey, the results of which are still being analysed so further revelations could be forthcoming.

He said: “There has been so much folklore built up around the tunnels, their locations and their uses and we are really grateful to Island Roads for helping us discover some hard facts. Mapping out the path of the Nunnery Steps tunnel will help further our understanding of the house and its grounds as well as settle a few local arguments. Establishing the extent of foundations of the old church, which was demolished in 1907, was a real bonus.”

“I look forward to continuing to work with Island Roads on the other side of the House to establish if there are tunnels that might lead to the Ice House, Church, Air Raid shelter or indeed the recently discovered game larder that was part of the original Bellevue House estate from the 1760s.

“We are always pleased to receive whatever information we can to help establish the history of the House so if anyone has any pictures, documents or notes I would be delighted to receive them, especially memories associated with the tunnels. Please email me at timwander@compuserve.com”

Andrew added: “It was fascinating spending time at the House and hearing of its colourful past – I hope my time there has helped the trust understand more about this history.”