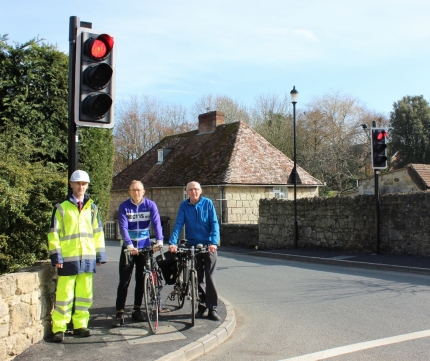 New traffic signals installed at Shalfleet which use advanced, microwave detection technology to improve road safety are proving popular with cyclists along this widely used stretch of road.

The old signals have been replaced by Island Roads as part of the PFI contract and, under the new system, additional microwave detectors have been fitted onto posts along the route between the signals.  This method of detecting vehicles works on the basis of movement – automatically extending the length of time the signal is shown if motorcyclists or cyclists are ‘spotted’ on the route, enabling them to pass through the stretch of road safely.

The previous system, operating off a loop cut into the road surface, could only provide a fixed time extension for the signals and its ability to detect cyclists or motorcyclists was extremely limited.  Using advanced technology, the new signals can now detect when vehicles and cyclists have safely cleared through the junction.

The signals have also been fully upgraded with new cabling throughout and use the latest extra low voltage signal controller and LED signal heads which mean the signal lights are both clearer and more energy efficient.

Tim Thorne from Cycle Wight said: “We’re delighted with the improvements made at Shalfleet which will make such a difference to cyclists and other road users on this route.  It has long been an issue of concern, particular for those cyclists heading in the downhill direction on this stretch towards Yarmouth, as the signals simply did not register cyclists and often did not give time for us to get to the end of the junction before we were faced with oncoming traffic.  We’re pleased that our concerns have been addressed and these welcome changes will make life much easier and safer for anyone using this route.”

The work to complete the installation of the new lights was carried out without the need for a road closure and footway improvement works were also scheduled to follow the works to repair and upgrade the pavements for pedestrians at the same time.