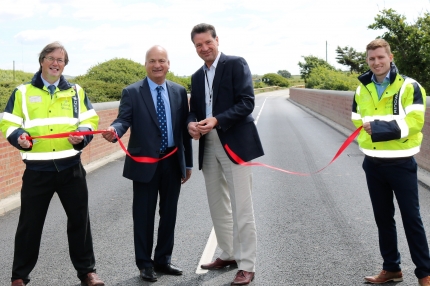 Members of the Island Roads’ Structures Team were joined by Councillor Ian Ward, Cabinet member for infrastructure and transport and Central Wight ward member, Councillor Steve Hastings, who cut a ribbon to mark the successful completion of the project.

The 17-week scheme ran to schedule, despite difficult weather conditions presented by the ‘Beast from the East’ in February, Storm Emma in March and unseasonably hot weather in April – all of which had the potential to slow the project down.

The entire bridge, which was built in the 1860s, has been repointed and sections of brickwork replaced as required. As part of the scheme, drainage features were also added to the bridge’s seven arches and the road surface which crosses the bridge.  A waterproof membrane has also been applied to protect the structure for years to come.

The bridge parapet walls have been rebuilt using more than 100,000 bricks. The walls were also raised and strengthened to ensure the viaduct meets modern traffic safety standards, while care was taken to make sure the design was in keeping with the history of the bridge. Island Roads worked closely with the AONB Partnership and the Isle of Wight Council.

During the works, a 20mph speed limit was introduced, along with traffic lights so the team could carry out the work safely. There was also a need to close the bridge for short periods while the drainage and resurfacing works were carried out.

“We would like to thank people for their patience while we carried out this important project, especially nearby local residents and businesses including Grange Farm and Isle of Wight Pearl, as inevitably there was some disruption due to the scale of the works, ” said Jason Boulter, Chartered Civil Engineer, who managed the project.

“The viaduct is a very impressive structure and carrying out the necessary works was not without its challenges due to its location which is very exposed because of its proximity to the coast. The work we have carried out, although possibly not appreciated by road users as the majority of repairs cannot be seen from the highway, is very important and will make sure the historic structure is preserved for years to come.”

Councillor Ian Ward, Cabinet member for infrastructure and transport at the Isle of Wight Council, said: “I am very impressed with the way this important bridge has been sympathetically restored in keeping with its surroundings, while meeting strict modern safety standards. Brighstone Viaduct is one of the Island’s hidden Victorian treasures and I am delighted that its future has been secured thanks to the extensive works undertaken by Island Roads.”

Island Roads would like to thank local contractor Crownpark, the Environment Agency, Isle of Wight Rights of Way Team, AONB Partnership, Natural England and Brighstone Parish Council for their input and co-operation throughout the project.