Historic bridge to be improved 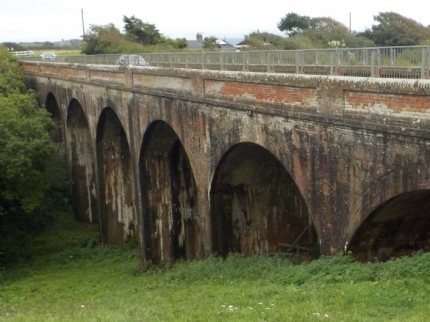 Island Roads is to begin a major project to repair and refurbish Brighstone Viaduct on the Military Road next month.

As well as repointing and repairing the structure which spans Grange Chine, the scheme will also rebuild and raise the brick-built parapet to ensure the viaduct meets current traffic safety requirements. This safety work will allow the railings, that were installed several years ago as a temporary measure, to be removed.

As part of the project, drainage features will be added to the arches and bridge deck (the highway across the bridge) and the structure will also be waterproofed to prevent deterioration.

Though the bridge is not listed, Island Roads has liaised closely with the AONB Partnership and the IW Council to ensure the historic nature of the bridge is respected.

The viaduct was built in the 1860s as part of work to improve the infrastructure in place to defend the Island against invasion. It is the third largest bridge on the Island in terms of road area and the only seven arch masonry structure.

The improvement programme is scheduled to last 17 weeks in total finishing before the May Bank Holiday. There will be two-way lights in place for the majority of the scheme and a road closure in place for approximately three weeks while the new road drainage system is constructed.

Project manager Jason Boulter said: “Most motorists will have driven over the structure completely unaware of the architecture beneath that supports the highway.

“It is a great example of Victorian craftmanship and our sympathetic improvement will ensure the structure meets modern safety requirements and also preserves one of the Island’s hidden treasures for years to come.”

Jason added: “As part of these works, the arch brickwork will be cleaned to remove existing staining which will improve the visual appearance and also make it easier to confirm the condition of the brickwork during future inspections.”

Work on the bridge is scheduled to begin on February 5.

Updates will be provided throughout the work. Island Roads will shortly give details of another intensive programme of work to maintain and improve structures across the network during 2018.