Island Roads 2015 charity fundraising gets off to a flying start 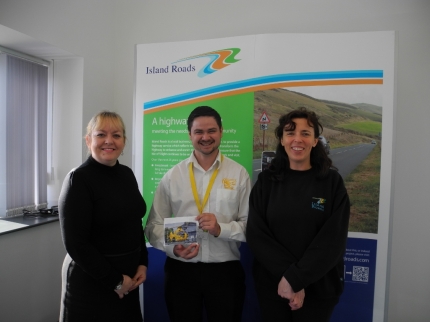 Staff at Island Roads have nominated Hampshire and Isle of Wight Air Ambulance (HIOWAA) as their chosen charity for 2015 and have already raised over £170 for the charity in their first fundraising event.

Island Roads hold regular raffles, cake sales, mufti days and pay day pennies events and each year a local charity is selected as beneficiary for events that are not linked to a national theme.  This year Island Roads’ employees agreed to support HIOWAA with their fundraising efforts.

Tracy Ringer, Performance Manager from Island Roads said: “From our office, we regularly hear the air ambulance land on its helipad at St Mary’s and we all recognise the incredible work they do as an organisation and the vital support they give to the local community of the Island as well as Hampshire, so it was a cause that our employees were keen to support.

“During the course of the year, our employees do a tremendous amount for community causes as well as helping to raise funds for our nominated charity of the year.”

In the first fundraising event, Christmas gifts provided by various suppliers were raffled with the money for tickets raising a total of £170.10 for HIOWAA.  Further fundraising events will take place during the course of the year.

Ian Browning, Community and Corporate Fundraiser for HIOWAA, said: “We’re delighted that employees at Island Roads have decided to support us this year with their fundraising efforts. Every day the air ambulance crew provide an efficient prompt response to road traffic collisions, sporting accidents, collapses and many other incidents across Hampshire and the Isle of Wight and the support we get from organisations like Island Roads is crucial to help us keep this vital lifeline service operating for local residents and visitors.”