Island Roads and volunteers create a buzz in Sandown 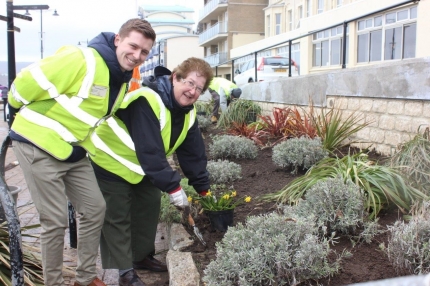 A flower bed and retaining wall on Sandown seafront were given an extensive makeover in time for Easter.

The 25-metre section of wall at Pier Street has been repaired and upgraded by Island Roads in a three-week project that has also introduced a series of ‘bee tubes’ into the structure.

These specially-designed habitats will provide a home to local bees adjacent to the flower bed at the foot of the structure that has also been replanted by the Sandown Green Town Volunteers in time for the holiday season. The existing plants had all been carefully removed and placed in storage by Island Roads so the necessary work – which includes introducing feature blockwork and new coping – could be undertaken.

Cllr Ian Ward, who represents Sandown South and is the cabinet member responsible for the highways PFI partnership, was on hand to help put the finishing touches to the project.

“There is no doubt that the new wall is a great improvement which has given the whole area a lift. The new blockwork replacing the old concrete façade is particularly welcome. And not only does the wall now look much better it will also provide a habitat to support the local bee population,” Cllr Ward said.

He also thanked Island Roads and Sandown Green Town Volunteers for all their hard work throughout the Town.

Jason Boulter, Island Roads project manager in the structures team, said: “This is the third project in which we have installed new bee habitats. Though cracks and crevices weaken a structure they can also provide shelter for local wildlife so we are keen to balance the need to repair and upgrade the Island’s network of retaining walls with the need to support the local ecology.”

Sandown Green Town Volunteers’ spokesperson, Christine Jackson, congratulated the Isle of Wight Road’s team on completing the work in time for Easter despite the inclement weather.

She said: “Tourists who visit the Island for a short Easter break often return later in the year once they have become enchanted by our towns and coastline.  This particular flower bed plays a key role in beautifying Sandown.  It received high praise from the Royal Horticultural Society’s inspector last year for its imagination and sustainability.”