Island Roads has marked its first anniversary with the completion of the major scheme to strengthen Bouldnor Road at Yarmouth. 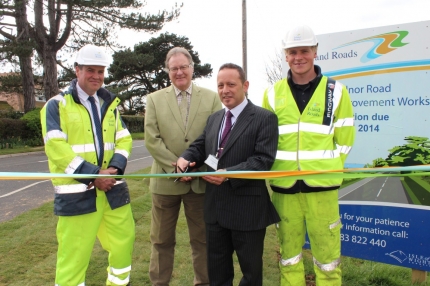 The work at Bouldnor is designed to prolong the life of what is one of the Island’s major strategic routes but one that has been historically deteriorating due to ground movement.

It is one of 18 geotechnical schemes being undertaken by Island Roads as part of the Highways PFI under which virtually the entire Island’s roads network will be brought up to standard and maintained in good order for 25 years.

Bouldnor Road was re-opened to traffic on Friday (April 4) by Councillor Jon Gilbey,  following a seven-week closure necessary for major piling and resurfacing work to be completed.

Cllr Gilbey said: “The Bouldnor scheme will make a huge improvement to what is a vital link to the West Wight and I would like to thank the people of the West Wight for their patience while this project was completed. It is a very good example of the massive investment the Island is seeing in its highways network, without the Highways PFI it would simply not be possible to have undertaken this kind of project, nor to bring the Island’s road network up to the standards we all want.

“This comprehensive programme of work will always involve some disruption but we hope any inconvenience will be more than offset by the future benefits this work will bring across the Island’s roads network.”

Most of this Island-wide improvement will be undertaken in the first seven years of the PFI contract – the Core Investment Period – so activity will intensify in the coming years.

It has dealt with over 150 highway emergencies, answered over 30,000 enquiries, repaired around 10,000 highway defects, carried out over 25,000 safety inspections, kept 21,195 km of roads swept (that’s from London to Sydney and some more!), regularly emptied 963 litter bins and 623 dog bins, carried out a programme of kerb replacements and quartering and hedge reduction, given safety talks to hundreds of schoolchildren and spoken to 2,000 visitors to the Island Roads mobile visitor centre.

Island Roads has also built a new HQ in Daish Way, Dodnor, and a winter maintenance depot at Stag Lane. It has also invested heavily in new plant and machinery. It has also had to cope with the challenges of establishing a major new business and also some of the worst weather conditions seen in living memory.

Paul Herbert, Island Roads services director, said: “It is clear that we have achieved a great deal in our first year but there is also much more to do. The condition of the Island’s highways network made it among the worst in the country and bringing it up to standard is an enormous task. As an Island company employing well over 200 local people and investing many millions with local businesses, it is a challenge we remain enthusiastic about and we are well prepared to deliver. ”