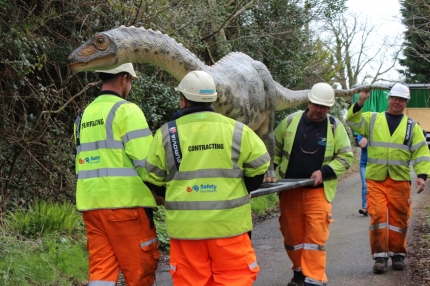 Island Roads workers were on hand to join a mammoth effort to help Gurnard Pre-School this week settle in two prehistoric newcomers.

The pre-school has become home to two replica dinosaurs, a four-metre long Sauropod and a triceratops who arrived recently at the end of a long journey from a dinosaur park in Germany where they have been specially made.

This week the pair of beasts finally arrived and immediately posed a monster-sized problem: how to get them into their new home – a special area created using landscape features provided by Ecclestone George and chippings donated by Barlow Tree Surgery.

Fortunately, help was on hand when a team from Island Roads offered to help move the dinosaurs during a break in their nearby work to improve Egypt Esplanade.

”We would like to thank all those involved one way or another in the project including our impromptu dinosaur wranglers from Island Roads without who we would have had a real struggle to get the dinosaurs into their new home.”

“Everyone has been so helpful by offering their assistance.”

She added: “Here at Gurnard Pre School we feel that dinosaurs, fossils and our wider geological heritage is a very important part of growing up here on the Island, which is full of wonderful geological sites and discoveries.

“We have set aside a space in our woodland area to give children the opportunity to learn and experience more on the subject. These two new arrivals will be a major part of that – both the staff and children are very excited.”

The two replica beasts are copies of dinosaurs that were first spotted by pre-school manager Val Munt and her husband Martin, Curator and Manager of Sandown’s Dinosaur Isle at the Munich Mineral and Fossil show in 2016