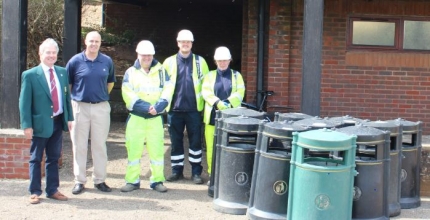 Island Roads has stepped in to help an Island golf club solve an unwanted litter problem caused by birdies.

Scavenging crows and jackdaws have been causing litter issues by raiding rubbish bins throughout the 6,044-yard par 70 course at Shanklin and Sandown Golf Club.

Now Island Roads has donated ten litter bins to the club which will put a stop to the anti-social avian activity.  The receptacles had previously been used across the Island’s highways network and their design will keep deposited rubbish out of the reach of raiding birds. Though the bins were no longer suitable for heavy public use on the highways network, with a sprucing up, they will be a valuable addition for the golf club.

Nigel Smith, Island Roads street cleansing supervisor, said: “We have a rolling programme to replace litter bins when they fall below a required standard. Normally we would dispose of them but when Shanklin and Sandown Golf Club asked us if we had any disused rubbish bins we were delighted to donate some.

“What better use of an old bin than to actually recycle it? I am not a golfer myself but I know clubs take great pride in keeping their courses in good condition.”

Andrew Freeman, 2016 Club Captain of 116-year-old Shanklin and Sandown Gold Club said scavenging birds had become a nuisance by taking rubbish deposited by golfers in the previous open bins and leaving it strewn across the course.

“We really appreciate the help Island Roads has given in finding a solution to the litter problem on the course,” he said.

Head of course management David McToldridge added: “It has been really good to work with Island Roads and we are delighted to have together found a practical solution which will help us keep the course tidy.”