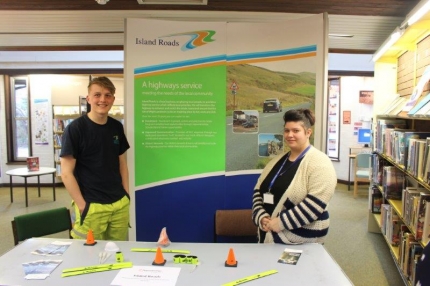 Both events brought together young Islanders with possible future employers and to provide careers advice.

The 10th National Apprenticeship Week event at the library brought together employers and apprentices from across the Island to celebrate the success of apprenticeships over the last decade and sought to encourage more people to choose apprenticeships as a fast-track to a career.

Elainne Piper, Ringway Island Roads HR Business Partner, said, “It was great to see so many young people interested in a future in highways maintenance and its supporting roles. We look forward to welcoming a new crop of apprentices in 2017.”

At the Future Finders event, local businesses were invited to showcase their organisation, share their experiences and help young people discover the huge range of careers on the Island and the wider Solent LEP area. Students from years 7 and 8 (aged 11-13) were invited with the aim of raising their aspirations and start them thinking about their futures.

There were sessions of ‘speed networking’ when, students spent a few minutes with each representative to ask questions and find out about job prospects and opportunities first hand from people within the world of work

Representing Island Roads were Jason Boulter and Teya Le-Moigne. Jason, a structures engineer, said: “It was great to be able to discuss careers choices with these young people and we were all impressed with their enthusiasm.”

Paul Herbert, Island Roads service director, said: “The Highways PFI is a long-term project and its delivery brings numerous opportunities to develop a range of careers.

“We have been delighted to support these two events and hope that among the talented and enthusiastic people met there were some future employees who will play a role with us in improving and maintaining the Island’s road network.”