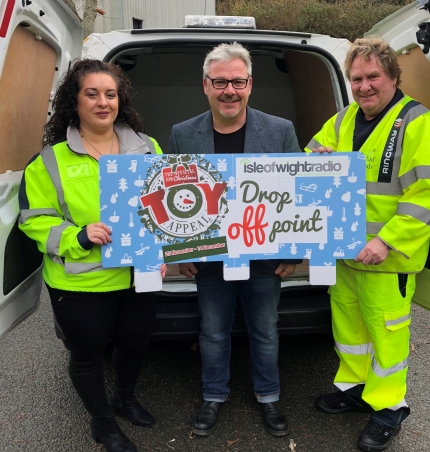 This year’s Isle of Wight Radio Christmas Toy Appeal is well and truly up and running with collection boxes now in locations across the Island.

Island Roads, who have become an official partner in the annual appeal, delivered the boxes to numerous locations and the challenge now is to get them full of toys in time for Christmas.

Island Roads supervisor Nigel Smith and administrator Maria Escandell collected the boxes from Isle of Wight Radio on Wednesday and delivered them to 13 locations to which toys can be donated.

Paul Topping, Isle of Wight Radio programme director, said: “We are now very much up and running so we would ask people to once again show their support for the appeal.

“This is a cause that the Island really rallies around and we are pleased that our friends at Island Roads have come on board by assisting with the distribution.”

Nigel said: “We were more than happy to do our bit and it was really good to see so much enthusiasm from those taking part at the collection points – we are sure this year’s appeal is another great success.”