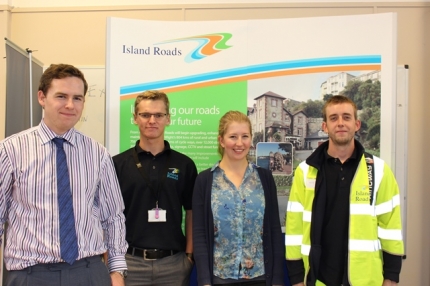 Island Roads’ newest district responder is proving an inspiration to others as he works his way up the career ladder.

James Coleman, who has progressed from apprentice to his current role in just two years, has been addressing young Islanders at a recent series of careers fairs at which Island Roads has been in attendance to explain more about the employment opportunities it offers.

James’ rapid rise at Island Roads, has made him a popular speaker at these events – so much so that other exhibitors have written to his bosses in praise of his contribution.

After hearing James in action at an IW College event, Southern Housing Group employment skills officer Lucille Farnsworth said: “James was such a positive role model and, I’m sure, really inspired many people to be interested in working for Island Roads. He was approachable, friendly, hugely positive about working for you and very informative

“I support Southern Housing Group residents into employment and he was really great with one of our young lads and really inspired him.”

James, 25, is a keen advocate for the apprenticeship scheme run by Island Roads which is open to people of all ages. He is one of nine people to take up such an apprenticeship among over 200 local people working for the company.

“For me it was perfect. It offered both the theory and the practical experience that was required –and I was being paid while learning about the role,” he said.

“I have gone from a person who was drifting a bit, into full employment with a company that offers long-term job prospects and the chance of genuine career progression. It has worked out very well for me and I am delighted to be able to tell my story to people about to leave school.

“They may be unsure about what the future holds but as far as I am concerned there is light at the end of the tunnel.”

“We view ourselves very much as a local company working to make significant improvements to the Island’s transport infrastructure. It is always pleasing when we see local people progressing through the company and making a key contribution to our work.”