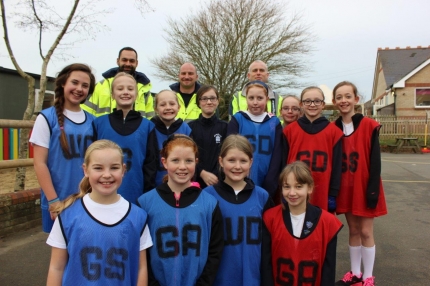 Netball at an Island primary school is set to flourish thanks to the support of Island Roads.

The highways maintenance PFI company has responded to a call from Newchurch Primary School for help in marking out a brand new netball court. Previously, the budding players had to learn the sport and train on impromptu courts marked out by cones.

“That was ok for teaching them rules and developing their skills but it was very difficult to play competitive matches,” said Head of School Vanessa Hicks.

“We will now be able to have more competitive matches between pupils here, across the school federation and also involving other schools. The new court is a massive help for us and we are delighted with Island Roads’ help.”

The school turned to Island Roads after reading about the company’s community volunteering scheme in its newsletter.

“We read about the scheme and given that we had just started the netball club wondered if there was anything they could do to help us overcome our issues with not having a proper marked court,” explained Netball Coach Kate Hyde. “We only really approached them on the off-chance and all we were really expecting was that they may provide some temporary markings. When Island Roads said they could come along and lay some permanent markings we were delighted,” said Kate. “It has all happened so quickly. The netball players are thrilled.”

Dave Wallis, Island Roads operations manager, said Island Roads was delighted to be able to assist the school, particularly in a project that encouraged pupils to undertake a healthy activity.

“The school also challenged us to mark the opening with a pupils versus Island Roads netball match. We were delighted to accept the challenge and were very impressed with the skills of the young players. I think there could well be some real stars for the future at Newchurch – they were certainly a match for us.”