Island Roads praised for storm response and clear up operation 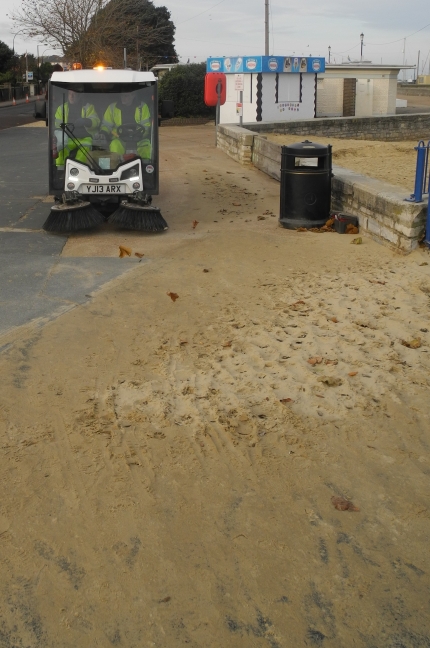 With torrential wind and rain hitting the Island’s already saturated ground after the wettest December and January in nearly one hundred years, Island Roads staff had another extremely busy weekend tackling more of the most challenging conditions seen on the Island.

With the worst of the weather hitting midday on Friday, scores of roads were overwhelmed by the volume of rainfall. Drainage teams were dispatched to pump water from drains that couldn’t cope with the sheer quantity of water going into them. Blackwater Road, Calbourne Road, Harding Shute and Merstone Lane were all closed as water levels made them impassable.

The wind picked up on Friday afternoon well into the early hours of Saturday morning. Over 50 trees fell across the Island in areas such as Hale Common, Brighstone, Alverstone, Shanklin, Wroxall, Ventnor, Calbourne and Freshwater. Island Roads crews were quickly dispatched to clear any highway obstructions.

In preparation for the exceptionally high tides, over 700 sandbags were dispatched to Yarmouth, Newport Quay, Freshwater, East Cowes and Cowes to help protect numerous properties from longer term water damage.

Island Roads staff also supported the efforts of IW Fire and Rescue Service by pumping around 14,000 gallons of water from drains in East Cowes to protect properties from flooding.

Street cleansing teams were then deployed to the worst affected areas from dawn on Saturday to ensure the majority of businesses were able to trade as normal throughout the weekend.

“Our employees and supply chain partners remain committed to keeping the Island’s roads safe and have become very accustomed to dealing with these extreme weather emergencies.

“We continue to respond to the challenges posed by the prolonged extreme weather conditions which have not subsided since Christmas.

“Clear up operations are still underway to remove debris washed up on the roads along Shanklin, Ventnor, Freshwater, Seaview and Ryde Esplanades.

“Whilst the effects of the recent weather conditions will have inevitably taken their toll on our roads and weakened them further, please be assured that we are committed to doing our upmost to treat as many of the defects across the network as possible ahead our extensive programme of surfacing work.

“In many cases our staff have really gone above and beyond the call of duty and they, like me have been really heartened that once again there have been a great many messages and calls of thanks received from residents who have appreciated the service we have provided.”