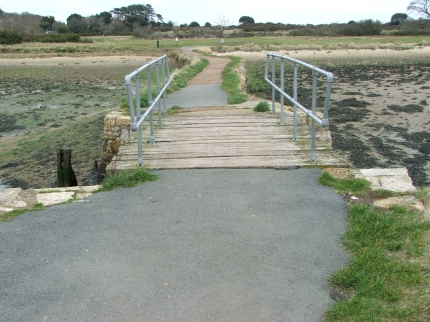 Footbridge at The Causeway, St Helens

A unique solution has been found to ensure a popular and beautiful access route to Bembridge can be maintained for locals and visitors. A new track-based technique is being used by Island Roads next month to replace two key footbridges, which form part of the Causeway at St Helens just to the north of Bembridge Harbour.

The Causeway was constructed to help power the tidal mill at St Helens which was built in around 1780 to grind corn.  The much-used route is linked by both the Old Swing Bridge and the nearby fixed bridge both of which have deteriorated over time, revealing signs of corrosion and timber rot requiring the replacement of both bridges.

However, the work presented several challenges as the Causeway is so narrow that it is not practical to use traditional heavy lifting gear to install the replacement bridges. At the same time both the Isle of Wight Council and Island Roads were keen to limit any closures for walkers using this well-liked route whilst the work was underway.

The solution will see the new bridge decks arrive in one section where they will be ‘skated’ along the narrow causeway and into position using a system of steel tracks and rollers. The replacement bridges will be made of a composite material to ensure they are suitable for the marine environment, are long-lasting and require minimal maintenance.  The old bridges will be dismantled and taken away from site on pontoons.

“Our contractors have used a similar system of steels beams and rollers to move heavy structures elsewhere in the country, but we think this will be the first time it has been done on the Island, certainly as part of a bridge replacement,” said Jo Huett who is a project manager with Island Roads’ structures team.

“It is unusual, but the Island does have many unique locations and it is our job to find the best solution for each challenge. In this case we have also been keen to look at ways of minimising the impact the work will have on those who use the Causeway.”

The project is due to start on 10th September and last for up to three weeks.  On Wednesday 29th August between 7pm and 8pm at The Pavilion at St Helens, Island Roads staff will be hosting a presentation for the parish council and residents who are interested in hearing more about the scheme.

The project has been timed to be undertaken outside of the main holiday season but also to comply with the MMO licence which states work must be completed before October.