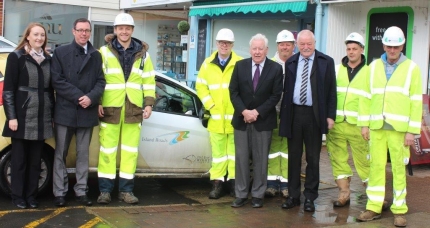 Island Roads has thanked Bembridge residents, businesses and the parish council for their support during recent work to improve the highways drainage in the village as part of the Highways PFI contract.

Since last autumn, Island Roads has been undertaking a major drainage scheme in Steyne Road and Lane End using local contractor Stoneham Construction.. The drainage project was completed on schedule recently ahead of the resurfacing of both roads next month as well as some remaining drain lining and tidying work.

Island Roads service director Paul Herbert said: “Even though the drainage work was programmed for over the winter when the Steyne Road and Lane End are not at their busiest, a project of this size will inevitably have caused some inconvenience to residents and businesses.

“Everyone involved in the scheme is extremely grateful for the understanding and co-operation – not the mention the friendliness – displayed during work by a great many residents and business owners.

“We have tried hard to keep the impact of the work on what are main roads through the village to a minimum and I am pleased to say we have also received some positive feedback from local residents. We will look to build on the lessons learned from this project as we undertake future major schemes throughout the highways PFI.”

Island Roads has also received thanks from the Bembridge community. Bembridge Parish Council clerk Emma Goldring said: “We are grateful for the work of Island Roads and the outstanding contribution from Stoneham’s Construction. We knew it would be a long and frustrating process for some but understood the importance of carrying out these much needed infrastructure improvements. We look forward to the new road surfaces being the cherry on top of the cake. I am sure the crew will miss out on the tea, cakes and bacon sarnies provided to workmen by residents during the project.”

And Richard Weaver, managing director of funeral directors Weaver Bros Ltd said: “Well done to everyone involved in an extremely well executed project. All the residents of Bembridge I speak to are very pleased with the courteous and helpful way the work has been done.”

Mr Weaver said Island Roads workers had taken particular care to clean the site and make sure work was not ongoing during funeral services. He added: “You know you’ve done something when you’ve closed a main road for weeks and some of the residents say they’ll miss you!”

Island Roads staff will be taking the mobile visitor centre to the Lane End parade on Wednesday 29 between 2.00pm and 3.30pm to talk to residents about the resurfacing work.