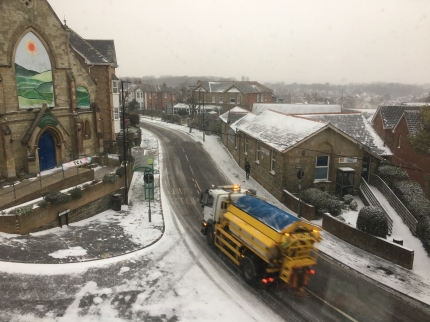 One of our fleet out in Shanklin

Multiple gritting runs covering a total of nearly 2,500kms of highway and using nearly 500 tonnes of salt were used between Thursday afternoon and Saturday morning last week to keep the network open during the height of the big freeze.

The Island experienced some of the coldest temperatures on record for early March, leading to the most intense period of winter maintenance activity ever undertaken by Island Roads.

Between Monday 26 Feb and Saturday 2 March Island Roads worked around the clock to treat the Island’s main roads as temperatures plummeted, running up to eleven gritters continually during the worst of the weather, supported by two tractors and three diggers to minimise the impact of the ‘Beast From The East’, which brought drifting snow, freezing rain and sub-zero temperatures to the Island.

Teams from Island Roads worked in extremely challenging conditions to keep the main roads moving, with crews also treating pedestrian routes in the main population centres. On Thursday and Friday alone, sevenseparate gritting runs were undertaken by crews. Over the freezing period Island Roads also answered calls to help other public services including St Mary’s Hospital in Newport, the Earl Mountbatten Hospice, the Household Waste Recycling Centre at Lynbottom and some of the Island’s leisure centres.

Crews cleared snow and ice from the grounds of St Mary’s Hospital and the hospice, making it easier for patients, staff and visitors to access the sites and move around safely. Treatment of the recycling centre at Lynbottom and Island’s leisure centres enabled them to open on Saturday morning despite the icy conditions.

“Although this was the first time we have had to deal with any significant snowfall since the contract started in 2013, we are well prepared and ouremployees were ready to put the winter maintenance plans into action,” said Dave Wallis, Island Roads operations and maintenance manager.

“Despite all the planning, our employees still put in a huge amount of time and effort during extremely poor weather conditions – often going above and beyond – to keep the network moving as weatherconditions changed through the week.”

Dave continued: “We provided regular updates to residents via our Twitter account @IslandRoads and were delighted by the number of positive responses we received. The messages of thanks were really appreciated by ouremployees and it made them even more determined to do the very best job for residents.”

Island Roads’ gritting fleet is fitted with the latest technology to ensure the most effective and efficient use of salt supplies. Salt is applied to the 354kms of gritting routes in a pre-wet format mixed with a brine solution which helps the salt stick to the road meaning it gets to work immediately and helps prevent ice from forming. The vehicles are also fitted with GPS trackers so that the control room know where they are on the network at any given time – even the rate and spread of salt and the speed of the vehicle can be monitored. At the height of the snowevent, ploughs were fitted to the gritting vehicles to tackle places where more than 3-4cm of snow had accumulated on the network.

Councillor Ian Ward, Cabinet member for infrastructure and transport at the Isle of Wight Council, said: “I was very impressed by both the preparations made by Island Roads and its response to the snow and ice last week. The crews worked in atrocious conditions to minimise the disruption caused by the weather and I know they also went the extra mile to help key services to stay accessible.”

Councillor Ward added that the costs both of the extra snow-related activity and also of treating any defects that arise on the project network as a result of the freeze-thaw action would be met by Island Roads under the terms of the contract.