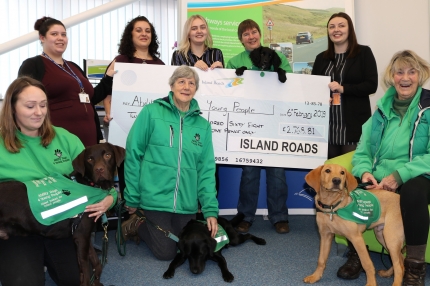 Staff at Island Roads have raised a record-breaking £2,700-plus for the Isle of Wight Ability Dogs 4 Young People charity.

The cash was raised from a number of events held during 2018 when the Ability Dogs 4 Young People was Island Roads staff’s chosen charity.  Events included a quiz night, dress down days, sweepstakes and a 24-hour bikeathon.

The money will enable the charity to buy a new puppy and will help towards the costs of its training.  The trained Ability Dog (after 2 years of training) will provide assistance to a disabled young person on the Island.

Maria Escandell, who helps organise staff charity events, said: “We are delighted with the total raised which is the most we have collected in a single year. It shows just how much of a chord the charity struck with staff.

“We are particularly pleased to have raised enough to  pay for a new puppy which staff have already named Dougal.”

Carol Court, Ability Dogs 4 Young People founder said: “This is a fantastic boost for us and we are very, very grateful to the staff at Island Roads.

“We have also previously been awarded grant by the IW Foundation which is made up of the partners behind Island Roads. All this money makes a real difference to our charitable work on the Island.”

Island Roads staff have chosen Newport based Home-Start, Isle of Wight as their charity for 2019.