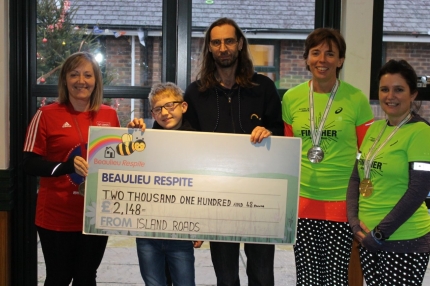 Island Roads staff have presented Beaulieu Respite with a cheque for £2,148.

The money was raised through a number of events held during 2016 – the year in which Island Roads staff had adopted Beaulieu Respite as their annual charity.

In other events, Island Roads staff also raised a further £1,331 for other charities including Macmillan, the Children’s Medical Research Institute, British Heart Foundation, Save the Children, Isle of Wight Toy Appeal and the Stroke Association.

Lisa said: “Everyone at Island Roads is keen to do their bit for the community and we were really pleased to be able to raise money in support of all the fantastic work undertaken by Beaulieu Respite. We hope that the money raised will make a difference to those who use and rely upon his wonderful facility.”

Matthew Rackett, assistant manager at Beaulieu Respite said: “We are so thankful for all the donations we receive especially one as generous as this.

“Beaulieu house supports young people with a complexity of needs from autism through to cerebral palsy with a goal of enriching their lives and giving them the tools to thrive into adulthood. These kind donations help us give amazing opportunities to young people enabling them to access fun activities, sensory equipment and exciting trips off the island.

“We would like to thank island roads for all their hard work raising the money that will have such a positive impact on the young people we support.”

Island Roads staff will shortly be deciding their charity for 2017 and any organisation wishing to be considered can email Island Roads on info@islandroads.com by Jan 30.