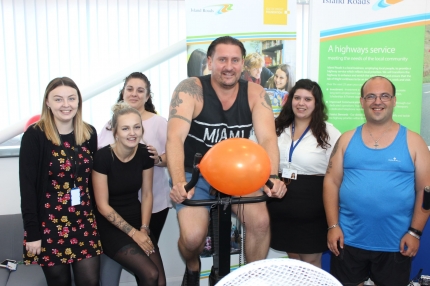 A sponsored static bike-a-thon by Island Roads staff has raised over £600 for their chosen charity – Ability Dogs 4 Young People.

More than 30 staff from across the business took turns in the saddle in the 24-hour challenge, clocking up 670 miles between them – the equivalent of cycling between Portsmouth and Scotland’s northern coast.

Lead fundraiser Luke Corbet said he was delighted with the event. “It was a real team effort – not just those who took to the saddle but all those who were involved in organising including Teya Le-Moigne, Tyler Jarman, Maria Escandell and Sabrina Sipiano-Burke.

“Staff here are really keen to support the fantastic work done by Ability Dogs 4 Young People and we hope the money raised will make a real difference to the charity.

Luke, who works as a customer services advisor at Island Roads, added: “The cycling left a few of us with some aches and pains but it was all worth it.”

TJs Gym in Lake providing a static bike free of charge in support of the event while staff member Tracey Gordon brought in a spare.

Ability Dogs 4 Young People is a local charity training assistance dogs to enhance the independence of disabled young people and children living on the Island. Island Roads staff chose the cause as their charity for the year and will next year present the charity with money raised from a number of events.