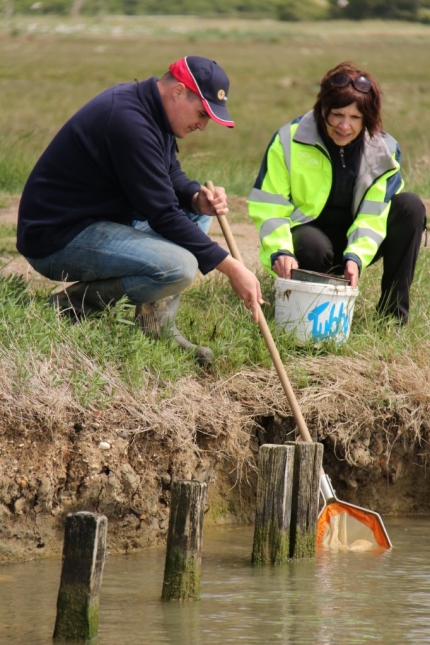 Alex and Helen join the hunt for wildlife at Newtown

Staff from Island Roads were among a team of volunteers to scour Newtown Estuary as part of a major event to identify and record the wildlife living there.

Staff from Island Roads were among a team of volunteers to scour Newtown Estuary as part of a major event to identify and record the wildlife living there.

A rare species of sea slug not recorded for 20 years, sea gooseberries, brittle stars and rare lagoon shrimps, were among nearly 400 species recorded during the BioBlitz study organised by the National Trust and the Biodiversity Action Plan Partnership to celebrate the 21st birthday of the estuary as a National Nature Reserve.

Around 200 people of all ages took part in the BioBlitz making it the largest study of its kind recently carried out at Newtown National Nature Reserve.

Island Roads staff Helen WIlliams and Alex Brown took part in the event through the company’s volunteering programme under which employees are encouraged to take two days a year paid leave in order to give that time to local charities and good causes.

Helen said: “It was great to be part of such a major ecological study and also fascinating to learn about the rich history of the area. For example, we had no idea that in the 1950s, the intention of the authorities was to build a nuclear power station at the entrance to the estuary.

“It was only the actions of local residents, amateur naturalists and Island school children whose efforts alongside the National Trust, the Solent Protection Society and the Council for the Preservation of Rural England in gathering environmental and biological data resulted in the plans finally being dropped in 1960.”

Robin Lang of the National Trust said: “It was a great day of wildlife recording and discovery and only made possible with the huge support of all the Biodiversity Action Plan partners including Isle of Wight Council, AONB, Natural History Society and many others.

“I got a feeling that visitors really enjoyed the experience. There was a real excited buzz around the whole Nature Reserve of experts recording and visitors having great wildlife moments. Some families stayed all day and then even came back for the evening bat walk. We rounded off the day with National Trust cake and then in the evening had good views of pipistrelle and serotine bats and two young long eared owls in the Newtown Meadows.”