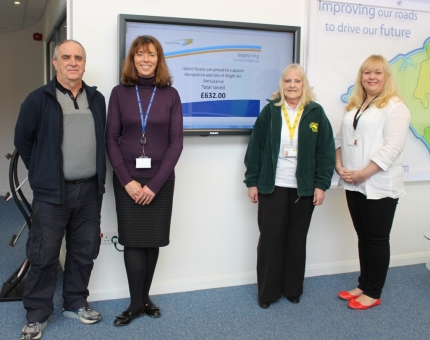 Staff at Island Roads raised over £2,500 in 2015 for local and national charities.

Funds were raised through regular raffles, cake sales, mufti days and events and money donated to a host of charities both on and off the Island.

Among those to benefit was Island Roads’ nominated charity of the year – Hampshire and Isle of Wight Air Ambulance (HIOWAA) for which they raised £632.  Others included Macmillan, Jeans for Genes, British Heart Foundation, Children in Need, Children’s ward at St Mary’s, Race for Life, Save the Children, Make a Wish Foundation and the Island’s Christmas Toy Appeal.

Tracy Ringer, Contract Performance Manager said: “As an Island company employing over 200 residents, our staff were keen to try and support charities and good causes that help the local community.  Hampshire and Isle of Wight Air Ambulance provide vital support to the Island community and our staff were really keen to help raise funds to support them.

HIOWAA CEO Alex Lochrane commented:  “Staff at Island Roads have raised a truly impressive amount of money for charitable causes and we are very grateful to them for choosing HIOWAA as their nominated charity of the year.  Their donation will help us to keep the Air Ambulance flying and saving lives and to be there for the Island community, should they need us.”

Island Roads staff are currently selecting the charity to support or 2016 and welcome any suggestions by 1 February to info@islandroads.com