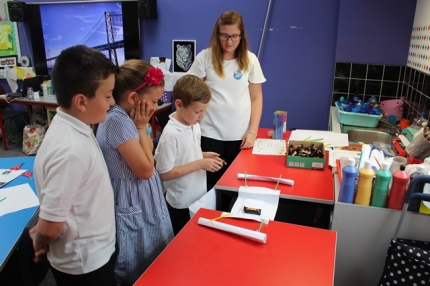 Island Roads staff have attended an event at a primary school in Cowes designed to give pupils an early insight into possible future careers.

Two Island Road graduates from the team that maintains the hundreds of bridges and retaining walls across the highways network along with communications officer Helen Williams were among representatives from many Island companies and education providers who supported the Careers Day at Lanesend Primary.

“We spoke about the work of Island Roads in general and then focused on civil engineering before we held a competition to see who could build a bridge out of paper and straws to hold the most mars bars,” said Joanne.

“It was a really well organised event with businesses and education providers from all over the island. I think it’s particularly important for us to put explain about engineering and its career opportunities at primary school age they still have all their options open.”

Lanesend head Caroline Sice thanked Island Roads for their participation. “The day was superb and raised aspirations for our children – many of the children said it was the best day ever!” she said.