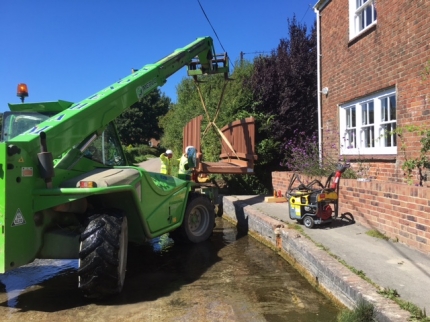 The new footbridge being installed at Clatterford Shute, Carisbrooke

The final phase of work to replace the expansion joint on Newport’s busy Medina Way bridge has been completed by Island Roads.

All the work, which has included the resurfacing of the southernmost section of the dual carriageway, has been completed at night time in order to reduce inconvenience.

The work has been part of a busy and ongoing programme of work to repair, upgrade and strengthen more than 60 highways’ structures – bridges and retaining walls – across the Island.

Besides Medina Way bridge, Island Roads has been and is continuing to work on a programme to repair and strengthen four bridges, Parkwater Farm bridge, on Yarmouth Road which has recently been completed, Binstead bridge on the A3054 Binstead Road, which is currently underway while Rolls Hill bridge in Northwood and Holbrooke’s bridge, near Bouldnor are due to be completed by the end of the month.

Meanwhile the second phase of the work to repair the retaining wall at Castle Road, Ventnor is due to be completed before the August bank holiday weekend and Balaam’s Passage (south) is also nearing completion upon which work on Balaam’s Passage (north) will begin.

Island Roads teams are also working on an extensive programme of painting parapet railings at 88 sites across the Island.

Ian Hodson, Island Roads structures manager, said: “The structures programme is progressing well and I think we have been successful in undertaking the necessary work without causing undue inconvenience to road users.

“This has been the most intensive and comprehensive programme of works undertaken on the Island’s network of bridges and retaining walls so far.  While much of this work will go unnoticed, it will play a key role in ensuring our roads and footways are safe for motorists and pedestrians.”