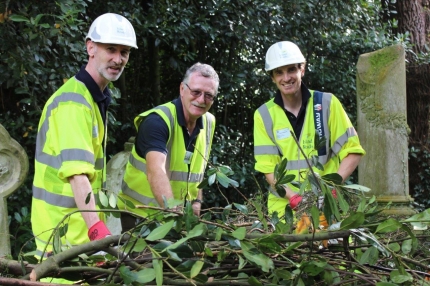 Island Roads staff have been helping volunteers put the final touches to the major project to restore and maintain Northwood Cemetery.

Next month the Friends of Northwood Cemetery in Cowes will host a ceremony to mark the completion of their project that has included the complete refurbishment of two chapels one of which has been converted into a heritage resource centre. The Project has been funded by grants totalling £1.68m. from the Heritage Lottery Fund and the Big Lottery Fund.

To help them get ready for grand opening, it has been a case of all hands to the pump with volunteers working hard on a number of tasks ahead of the big day. Island Roads have been among helpers with five staff members spending a day at the 17-acre cemetery. The Island Roads contribution has been under the company’s volunteering scheme that encourages all employees to take two days paid leave a year to support local good causes.

It is the second time an Island Roads team has spent time assisting the project having carried out similar work in 2014.

Mark Dawson said: “Once again it has been brilliant to be part of such a worthwhile project. It has been hard but well worth it. It has been really interesting to see all the work that has been completed since I was last here – the transformation is amazing.”

Peter Almond. Chairman of the Friends of Northwood Cemetery who invited Island Roads staff to lend a hand said: “They have done a fantastic job. There has been so much to do ahead of the grand opening so we are thrilled that Island Roads have turned out in force to lend a hand.

“They have undertaken a terrific amount of work at a very important time for us and we are very grateful to them and all those who have rallied around ahead of the opening on October 11.”