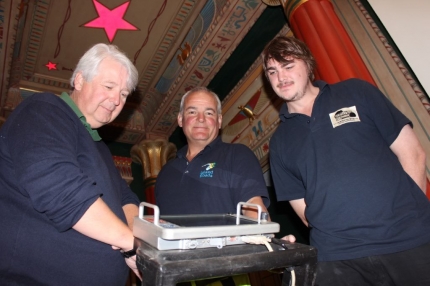 The presence of a ‘secret chamber’ built beneath Northwood House’s Egyptian temple has been confirmed by a high-tech study carried out of the historic building by Island Roads.

While finally corroborating the long-standing suspicion of a hidden room beneath the Egyptian temple, the confirmation has also left Northwood House Charitable Trust with a new mystery – what on earth was the secret chamber used for?

The room was discovered during a detailed study carried out by Island Roads utility surveyor Andrew Tunnicliffe using ground penetrating radar normally used for checking for underground services prior to road improvement work. Andrew spent a day at Northwood House as part of Island Roads’ volunteering programme in which staff are given two days paid leave annually in order to lend a helping hand to local good causes.

“It was thought that it had been purchased from the 1851 Great Exhibition in London but recent research place it much earlier possibly somewhere between 1838 and 1845,” said Tim Wander who is currently working with the Charity as the Building Project Manager overseeing the current phase of renovation works and working on future developments for the Grade II* Northwood House and Park.

“The canopy is covered in hieroglyphics which were for many years thought to be made up. Again recent work has found that they are correct ‘words’, but not sentences. They are currently being deciphered and as they repeat on all four sides it is clear that the canopy was originally designed to be free standing.

“Whatever its origins Egypt Corner is unique in British country houses. In Egypt, such a canopy would normally have covered a tomb and one of the enduring mysteries of the Northwood House is that there is a clear and large void under the canopy, but no signs of such room can be found below in the current cellar layout. “

Andrew said: “It was a fascinating job to help the trustees discover more about such a historic, and mysterious, house. I am pleased that Island Roads has played a part in discovering this secret history.”

Other organisations, charities or community groups wanting to put forward projects to be considered for voluntary support can do so by emailing their request to info@islandroads.com

In the past Island Roads staff have undertaken projects including the clearance of vegetation from an overgrown cemetery, painting a sports courts at a local school, clearing vegetation away from the View Point at Yarmouth and making safe a local scout hut.