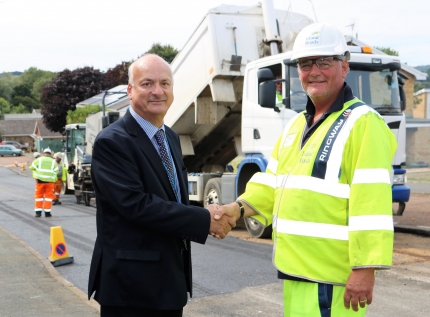 Island Roads are keen to thank residents for their patience as work to improve a busy residential road in Sandown is nearing completion.

Perowne Way in Sandown had originally been scheduled for surfacing improvement work in August 2017 but the introduction of emergency weight restrictions on Spicer’s Bridge at Langbridge, Newchurch meant the work had to be postponed to enable additional heavy goods vehicles to be diverted along Perowne Way.

The busy route, which connects a significant residential area of Sandown is also a popular route during term time for students and parents walking to nearby Sandown Bay Academy and The Bay CE Primary, meaning the vital resurfacing work had to be scheduled during the school holidays.

The improvement work along Perowne Way, which started in mid-August, will bring the volume of roads resurfaced on the Island so far this year to 37.9km or roughly the same distance driving from Totland to Bembridge.

Councillor Ian Ward, Cabinet Member with responsibility for the Highways Partnership and local ward member, visited the site to see first-hand the resurfacing work taking place and said: “I’m delighted to see the improvements that have been made for local residents who use this key route in my ward and to see the great many other road improvement schemes that have been completed across the Island over the course of this year. Whilst there is still more work to be done, it is clear that the condition of our road network on the Island is improving and should bring us lasting benefits as a local community.”

Island Roads Supervisor Andrew Tunnicliffe, who led the team on site during the works added: “We are very grateful to the local residents who have waited patiently for these much needed improvements to be carried out and would like to thank them for their continued support during these works.”