Island Roads volunteers help get to grips with growing problem 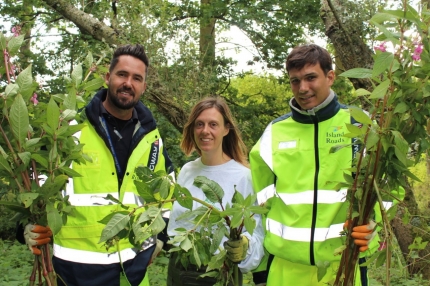 Island Roads staff have joined ongoing efforts to rid the Island of an invasive plant species that has taken root in two environmentally sensitive areas.

Himalayan Balsam has established itself on land around the Eastern Yar and at Wroxall Stream. For the past six years, experts from Island 2000 have been leading efforts to eradicate the plant because it out-competes and depletes native flora.

This is a problem not only because the invader disturbs the natural ecological balance, many of the plants displaced by Himalayan Balsam are those that anchor the riverbanks and without which flooding is more likely.

Seven Island Roads staff whose work takes them out and about across the Island have recently joined Island 2000 in their work to remove the Himalayan Balsam plants before they seed.

While this was done under Island Roads’ volunteering scheme, it is also useful as the staff are all now familiar with the invasive plant so they can spot it and organise its removal should it spread to areas covered by their highway maintenance duties under the PFI contract.

“The weather this year has provided perfect growing conditions for Himalayan Balsam and it is seeding around a month earlier than usual so the extra help we have been getting from Island Roads has been important and very welcome,” said Carol Flux who manages Island 2000’s Plant Positive programme.

“The volunteers have been working really hard putting in well over 1300 hours of pulling and scything since April, so Island Road’s input has been fantastic. We held joint sessions with our volunteers and Island Roads staff and it increased our understanding of the work that Island Roads does too. We hope they come back next year.”

“Himalayan Balsam is quite literally a growing problem and we have been working to control it for six years. Pulling it up is the best tactic as we don’t like to use herbicide sprays as it typically grows near watercourses. While we are making progress it is a labour-intensive progress we are always grateful to have a helping hand.”

Mark Roberts, Island Roads Asset Manager, said the staff who had volunteered to join efforts to remove Himalayan Balsam had included district stewards who were the company’s ‘eyes and ears’ out and about around the Island.

“While Himalayan Balsam has not been a big issue on the highway and cycleway network for which we are responsible we are keen to keep it that way,” Mark added.

“By helping Island 2000 through our volunteering programme our staff have become very familiar with the plant and how to dispose of it which will help us in our ongoing work to prevent Himalayan Balsam establishing itself on roadside.”